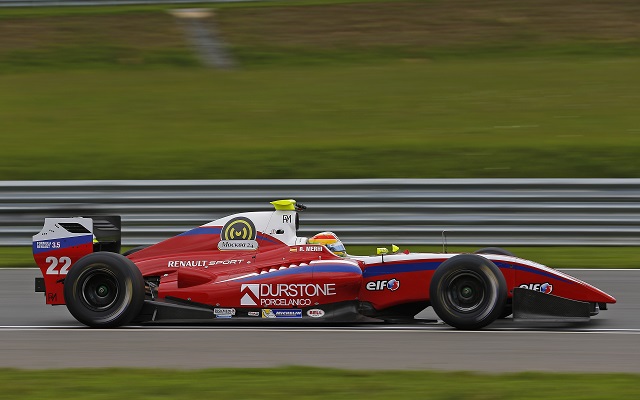 Zeta Corse driver Roberto Merhi converted his first pole position in the series into a maiden victory in the Sunday Formula Renault 3.5 race at Moscow Raceway.

The Spaniard managed a good start and kept the lead off the line as, behind him, fellow front row starter Richie Stanaway bogged down and wound up overtaken by Red Bull junior Pierre Gasly.

The Kiwi managed to put severe pressure on Gasly over the opening lap, allowing Merhi to pull out a gap of three seconds over just one lap.

It was smooth sailing for Merhi from that point on as he maintained the three-second lead over the opening stint of the race. The Spaniard was among the last drivers to take the mandatory stop and, despite a slight hiccup during the procedure, he managed to come out ahead of Gasly.

Having exited the pits, the former F3 Euro Series champion then put in a series of sublime laps and was free to cruise to the checkered flag, picking up his first win in the series.

Gasly took a crucial second, decreasing his distance from the championship lead, while Stanaway picked up his first podium in the series in third place.

Sergey Sirotkin managed to find his way around teammate Oliver Rowland during the opening lap and stayed narrowly ahead of the Briton for the entire race, finishing in fourth place.

Championship leader Carlos Sainz minimized the damage after starting from P11 by coming in for an early stop and eventually undercutting his way to sixth place in the running order.

Matias Laine finished seventh for Strakka, narrowly ahead of Zoel Amberg and teammate Will Stevens, while Will Buller rounded out the top ten.