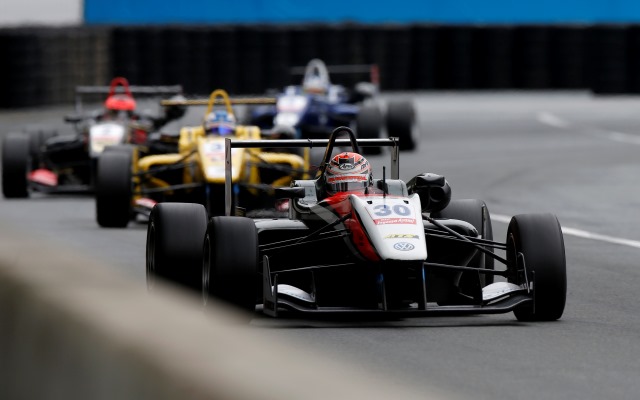 Max Verstappen completed his second consecutive hat-trick of wins in the FIA F3 European Championship as he took a straightforward win in the third and final Norisring race.

Verstappen retained the lead from pole position, avoiding the chaos that kicked off behind him. There was carnage even before the first corner as Roy Nissany tangled with Jules Szymkowiak and ended up in the barrier, before Jake Dennis triggered a pile-up at turn one.

Dennis locked up, took to the inside of the corner and barrelled into second-placed Carlin team-mate Tom Blomqvist, taking both out of the race, holding up several others and bringing out the safety car.

After the restart, Verstappen was comfortable up front despite having championship leader Esteban Ocon in second place, finishing up 4.7 seconds clear.

Despite not having the pace to keep up with Verstappen, Ocon was able to stay out of the reach of Jordan King, who claimed a second straight podium in third place.

Verstappen’s six straight wins have brought him up to second in the standings, cutting Ocon’s lead to 74 points.

Verstappen’s fellow 16-year-old Santino Ferrucci completed his impressive second weekend in the series with fourth place. He was passed after the safety car by Sean Gelael, but got back ahead into the final corner with fellow American Gustavo Menezes following him through. Ferrucci and Menezes were inseparable for the rest of the race, but Ferrucci managed to stay ahead.

Gelael beat his long-time team-mate Antonio Giovinazzi to finish sixth, while Lucas Auer recovered to eighth after getting held up in the first corner skirmish and dropping back to 18th. Antonio Fuoco also got past Tatiana Calderon, who just held off Felix Rosenqvist for the final point. Rosenqvist had been affected even more than Auer by the start incident, ending up back in 21st.