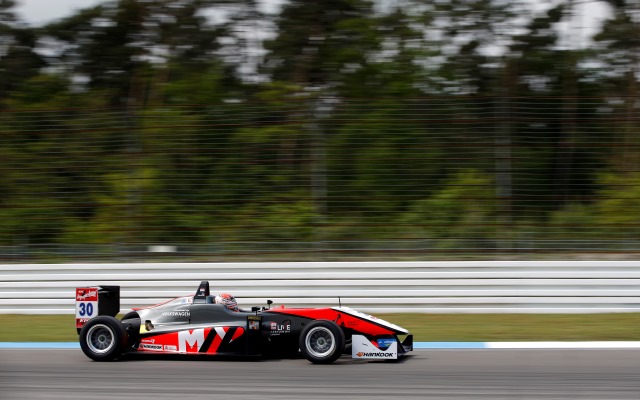 Max Verstappen claimed his first FIA F3 European Championship win in the third and final race of the Hockenheim weekend.

The 16-year-old single-seater newcomer began the race from pole position and made a great start to put a 1.5 second gap between himself and Esteban Ocon.

That advantage was eliminated by an early safety car period, but he managed to keep the lead for the rest of the race, winning by 0.8 seconds.

Ocon’s attention was taken away from Verstappen and onto the car of Prema team-mate Antonio Fuoco behind him. The Ferrari protege inherited the final podium spot when Felix Rosenqvist crawled to a halt and went on to put pressure on Ocon.

Race one winner Lucas Auer took fourth spot away from Antonio Giovinazzi towards the end, while Jake Dennis completed the top six ahead of?Carlin team-mate Jordan King, who made up four spots in one lap after the safety car. That took him from 12th to eighth, and he gained another place when Ed Jones was handed a drive-through penalty for ignoring track limits.

Tom Blomqvist and Felix Serralles were forced to retire after opening lap contact.