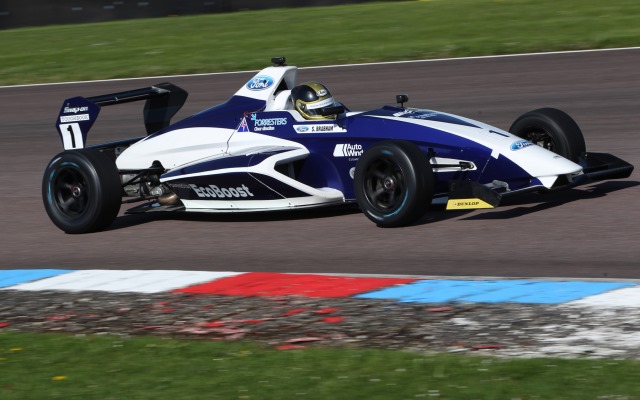 Sam Brabham collected his second Formula Ford GB win of the weekend at Thruxton with another lights-to-flag win in race three.

Starting from pole again, Brabham kept the lead off the start and kept JTR team-mate Jayde Kruger behind him for the duration, winning by 0.709s.

Harrison Scott followed the leading pair for much of the race but began to come under pressure from impressive Jamun Racing recruit Ashley Sutton.

Scott and Sutton came across slow backmarker Greg Holloway at the final chicane and as Scott pulled to the right at the exit to move around the Australian, contact was made with Sutton that pitched Scott into a spin.

Sutton inherited his second podium finish of the weekend ahead of Max Marshall after the pair had duelled earlier in the race.? Race two winner Juan Rosso recovered from the back of the grid to pass Radical Motorsport team-mate James Abbott for fifth.

Scott dropped back to seventh, meaning he loses the championship lead that he had gained from Kruger earlier in the weekend, with the South African now three points ahead.

Ricky Collard came out on top of a race-long battle with the Meridian Motorsport cars of Connor Mills and Bobby Thompson to claim eighth.