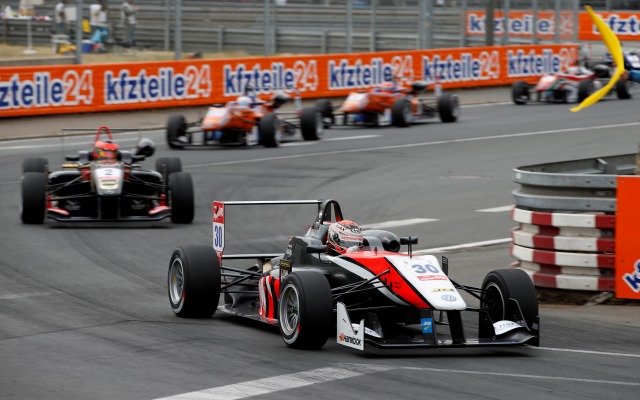 Max Verstappen scored his fourth consecutive win in the FIA F3 European Championship in race one at the Norisring.

The race was interrupted by four safety car periods, but Verstappen managed to fight his way to the front after dropping back from third to fourth at the start.

After the second safety car intervention, Esteban Ocon dived down the inside of pole-sitter Felix Rosenqvist at the first corner to take the lead.

Having got back ahead of Tom Blomqvist after his poor start, Verstappen quickly followed Ocon past Rosenqvist to get up into second. A couple of laps later he then moved past Ocon and into the lead at turn one.

Rosenqvist was shuffled down to sixth by the finish, with his Mucke Motorsport team-mate Lucas Auer claiming the final podium place.?Nicholas Latifi claimed his best result since Silverstone in fourth, while Jake Dennis continued his strong form in fifth.

Roy Nissany was seventh ahead of Felix Serralles and Sean Gelael, while Blomqvist recovered to tenth after pitting to change a damaged front wing.

The first safety car was triggered by a first corner incident that eliminated Felipe Guimaraes and Dennis van de Laar. Contact between Antonio Fuoco and Gustavo Menezes caused the second interruption on lap six, while the third was caused by Antonio Giovinazzi running into Tatiana Calderon. The detached front wing of Jordan King prompted the final caution.