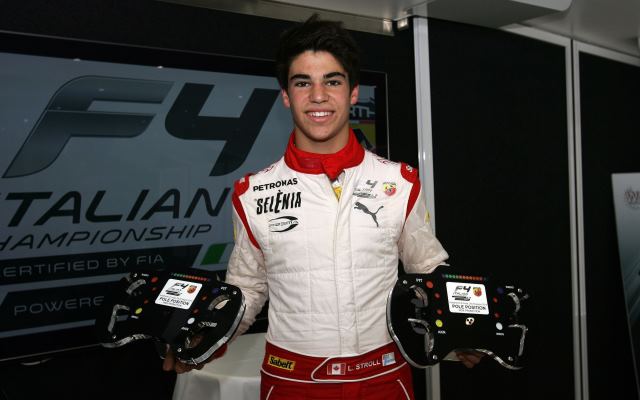 15-year-old Lance Stroll followed up his qualifying domination at Adria with another double pole position at Imola in the second round of the Italian F4 season.

The Canadian went on top halfway through the first session and wrested the lead back from teammate Brandon Maisano towards the end, taking pole by a mammoth 0.7 seconds.

SMP-backed Russian driver Ivan Matveev managed to get a surprise third place, ahead of Italians Mattia Drudi, Matteo Cairoli and championship leader Andrea Russo, with less than a tenth separating sixth from third.

Leonardo Pulcini took seventh on the grid, with the Malta Racing duo of Zack Dante and Keith Camilleri almost a second behind the Euronova driver in eighth and ninth. Swiss driver Alain Valente was the lone Jenzer driver in the top ten grid spots for race one.

The second qualifying session, which decided the grid for race three, saw the Prema drivers stay in the pits till there were just seven minutes to run. F & M driver Drudi took advantage of their early absence and stayed on top for most of the session. Maisano went fastest on his penultimate run before Stroll took over, vaulting up from seventh with his last lap to take pole.

Maisano improved on his final lap but fell 0.082s short of Stroll, with laptimes on Saturday morning being considerably slower than those of Friday practice. Drudi held on to third by five-thousandths of a second ahead of Cairoli. Swiss driver Edi Haxhiu improved significantly to take fifth on the grid, ahead of Russo, who secured sixth again.

Matveev and Pulcini, both racing for Euronova-run teams, locked out the fourth row of the grid. Camilleri qualified ninth, with Brazilian Joao Vieira tenth.