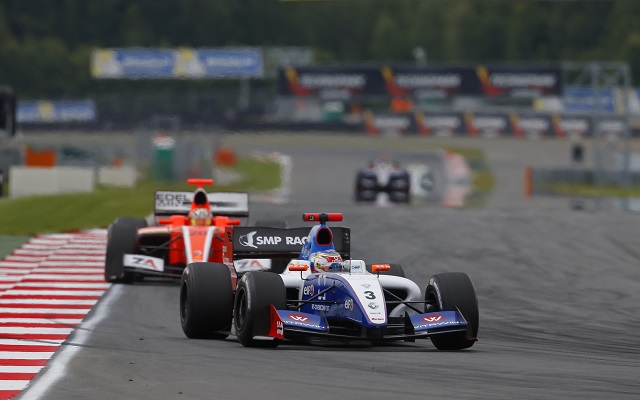 Sirotkin withstood race-long pressure from his closest rival – AVF’s Zoel Amberg – and managed to lead the race lights-to-flag to the delight of local fans.

There was drama prior to the beginning of the race as, following the formation lap, the start was aborted due to three drivers indicating issues on the grid.

The three cars, none of which got going for the extra green flag lap, belonged to the three drivers who topped the standings coming into the race – Red Bull juniors Pierre Gasly and Carlos Sainz and RSF-backed racer Oliver Rowland.

Sainz and Rowland did manage to start from the pitlane without going a lap down and went on to collide seven laps into the race in the final corner while fighting for P17.

With Gasly’s front row spot left vacant for the start, Sirotkin easily led the field into turn one, while Amberg assumed second place.

The Swiss driver was a second and a half off the race lead early on, but managed to take the gap down to a second in no time and remained a constant threat to Sirotkin for the majority of the race.

At some point near the halfway of the allotted time it appeared that Amberg had settled for second place, but a slow lap from the race leader allowed him to drastically close the gap down.

Amberg continued to loom over Sirotkin during the final minutes, but could do nothing to prevent the Russian’s first win in the series.

Pietro Fantin finished a lonely race in third, picking up his first podium in the category. Meanwhile, Roberto Merhi fended off Jazeman Jaafar to secure fourth.

Will Stevens brought some points home in sixth, while Stockinger held on to seventh, leading Matias Laine and teammate Richie Stanaway.

In tenth, Oscar Tunjo secured his first points in the series.