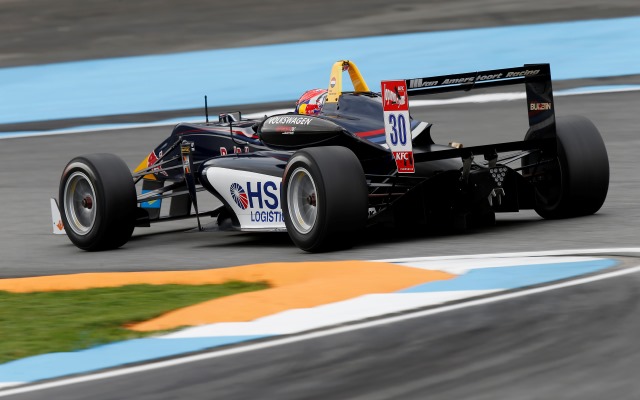 Max Verstappen scored his tenth win in the FIA F3 European Championship in race one of the final round at Hockenheim, leading from start to finish.

Starting from pole, Verstappen got a good launch but was kept honest in the opening laps by fellow front row starter Lucas Auer.

Verstappen would later pull away though, winning by 3.7 seconds.

Tom Blomqvist challenged Auer into turn one at the start but had to settle for third place after that, seeing his gap to Verstappen in their fight for second in the championship open up from three to 13 points. However, Blomqvist starts the final two races of the season from pole and Verstappen will only be ninth and eighth.

Antonio Giovinazzi followed his Jagonya Ayam with Carlin team-mate home in fourth, while Felix Rosenqvist made up a couple of places on the first lap to take fifth. Jordan King recovered from lost ground on the first lap to finish sixth, putting a move on a subdued champion Esteban Ocon.

The Frenchman had to make do with seventh as his Prema team uncharacteristically seem to be struggling for speed around the German circuit. Behind him, Gustavo Menezes was eighth, while Felix Serralles took ninth after passing Sean Gelael at the second attempt – the first, around the outside of turn 10, saw them make contact and Serralles run wide.