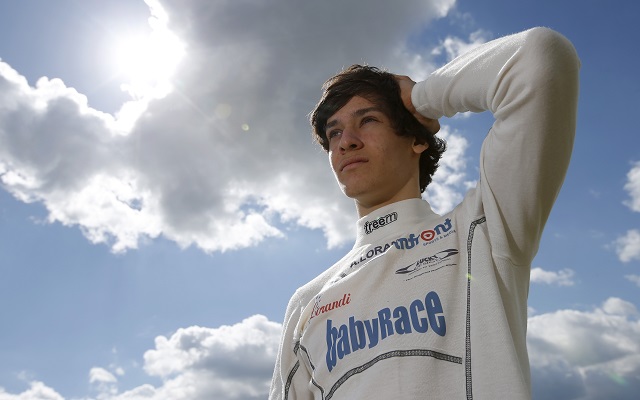 Van Amersfoort Racing was the team to beat in FIA F3 European Championship free practice at the Pau Grand Prix, with its three drivers each topping one of the four segments and Alessio Lorandi fastest overall.

The field has been split into two groups for the purposes of practice and qualifying, and for practice each group had two 20-minute sessions.

It was single-seater rookie Lorandi who ended up with the best time from the 80 minutes of running in total, setting the pace in the final session.

The morning started with a wet track, with Charles Leclerc setting the best time in the first quarter of 1m23.913s,?0.965s ahead of team-mate Arjun Maini. Santino Ferrucci, Alex Albon and Lance Stroll were next up, with title contenders Felix Rosenqvist and Antonio Giovinazzi sixth and seventh respectively.

Jake Dennis set the pace for the even-numbered runners in the following session, taking half a second of Leclerc’s time. Gustavo Menezes was second ahead of Lorandi, Maximilian Gunther and Ryan Tveter.

Conditions improved in practice two, and in group A, Maini turned the tables on Leclerc to set the quickest time, a 1m19.736s. Giovinazzi, Albon and Rosenqvist completed the top five.

Lorandi bettered Maini’s time by nearly four tenths of a second to top group B in FP2, over a second clear of second-placed Markus Pommer. Dennis and Menezes were third and fourth, with Pietro Fittipaldi completing the top five.

The rain began to fall again during the final session, and a crash for Menezes caused it to end prematurely.

Sergio Sette Camara and Mahaveer Raghunathan both crashed in the first segment and ruled themselves out of FP2. Callum Ilott and Nicolas Pohler came to grief in the second part of FP1, as did F3 debutant Gustav Malja in the first part of FP2.

Malja is on his own at Eurointernational this weekend as Nicolas Beer has not recovered from injuries sustained at Hockenheim, while Fortec’s Peter Li is also absent, making for a 34-car field.