written by Valentin Khorounzhiy 15 May 2015 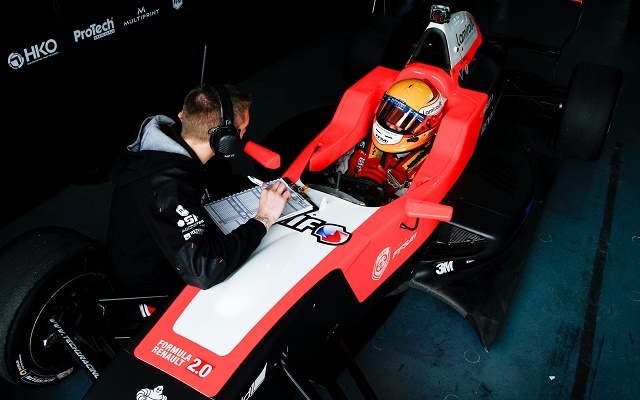 Frenchman Anthoine Hubert led a Tech 1 Racing 1-2 in the first qualifying of Formula Renault Alps’ second round of 2015 at Pau.

Hubert managed three session-best sectors during his benchmark lap and was handed pole when a red flag ended the session three minutes early.

It was JD’s Matevos Isaakyan who led qualifying with five minutes to go, having been on the podium in his Formula Renault debut at Pau last year.

But Hubert, on a drying track, took more than two seconds off Isaakyan’s time to go quickest.

As the Russian was in the pits, Simon Gachet and Vasily Romanov surpassed his time as well and he got no chance to retaliate, with Daniele Cazzaniga appearing to hit the barriers and ceasing track activity.

So it was an all-French front row and an all-Russian row two, while Martin Kodric and Jake Hughes followed in fifth and sixth. Stefan Riener was right behind his teammate in seventh, with Thiago Vivacqua in eighth.

Ben Barnicoat led the session early on, but ended up having to settle for ninth, while high-profile returnee Matthieu Vaxiviere is to line up in tenth.

Championship leader Jack Aitken missed out on the top ten by two tenths and will start 11th.