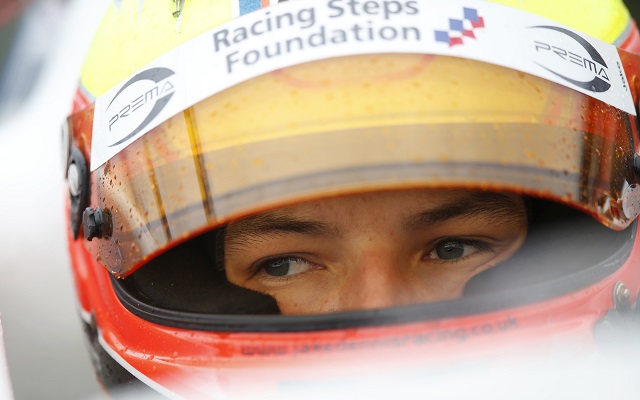 Jake Dennis has claimed his maiden FIA F3 European Championship pole position in a wet qualifying session for race one in Pau.

The Briton, who enjoyed the best weekend of his rookie season last year on the French street circuit having gained experience there in Formula Renault 2.0, put in two quick laps at the end of the second group of qualifying to claim pole.

Charles Leclerc had dominated the first group, leading it from start to finish and gradually improving his time to a 1m22.845s.

In the second group, Dennis traded places with practice pace-setter Alessio Lorandi in the early stages before Maximilian Gunther took charge prior to a red flag when Ryan Tveter and Michele Beretta tangled.

Lorandi’s fellow karting graduate Callum Ilott became the first driver to dip below Leclerc’s benchmark with just over a minute left, only for Gunther to respond.

Dennis then took top spot just prior to the chequered flag, before setting a string of fastest sector times to make sure of pole.

Gunther will share the second row of the grid with championship leader Antonio Giovinazzi, who ended up 0.451 seconds shy of Leclerc in the first group.

Row three will be made up of Ilott and Alex Albon, while Lorandi will start seventh alongside Gunther’s Mucke Motorsport team-mate Mikkel Jensen, who had climbed to second in the first group with seconds left on the clock.

George Russell shared top billing in the second group for even-numbered cars with Dennis but will have to make do with ninth on the grid alongside Arjun Maini, who makes it three Van Amersfoort cars inside the top ten.

Having been quickest in qualifying for every race at the first two rounds, last year’s Pau Grand Prix winner Felix Rosenqvist ended up seventh in the first group, leaving him 14th on the grid just behind Prema team-mates Lance Stroll and Brandon Maisano.

Nicolas Pohler and Mahaveer Raghunathan finished bottom of the two groups and have therefore missed the 32-car cut for race one, the latter after causing a mid-session red flag in the first segment.