Home News Two poles for Gill, one for Fittipaldi at Snetterton
NewsProtyre FR2.0 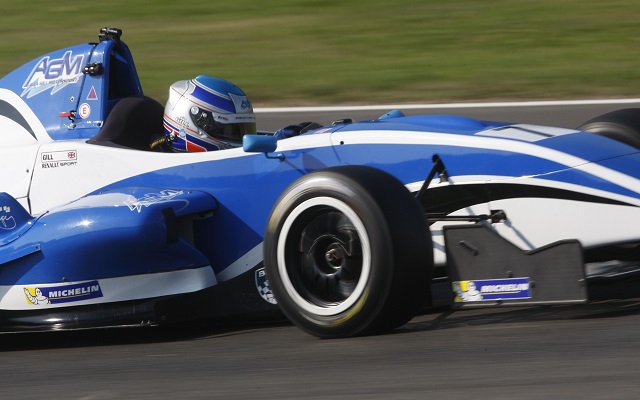 Alex Gill and Pietro Fittipaldi will share pole positions for the fourth round of the Protyre Formula Renault series at Snetterton.

Gill secured poles for races one and two in a closely fought first qualifying session, while Fittipaldi took pole for race three in session two.

The fight for pole in first qualifying came down to the wire – while Gill led as the checkered flag was waved, it was Fittipaldi who briefly held provisional pole after a subsequent personal best effort.

However, Gill managed to improve as well, returning to the top of the timesheets, while Piers Hickin then subsequently demoted Fittipaldi off the front row.

As such, Fittipaldi had to settle for third for race one, with his squadmate Tarun Reddy alongside him in P4. Another MGR racer Matteo Ferrer was fifth, ahead of TJ Fischer, Colin Noble and Patrick Dussault. MTech’s Hayden Edmonds and SWB’s Jack Butel rounded out the order.

The top three was the same on second-best laps, which determined the grid for race two. However, time, it was Cliff Dempsey Racing driver Fischer who joined Fittipaldi on row two. Ferrer and Reddy were fifth and sixth respectively ahead of Noble, Dussault, Edmonds and Butel.

Championship leader Fittipaldi bounced back in session two, putting in a superb late lap to secure pole by three tenths of a second. Hickin, yet again, was second, with Gill and Reddy making up row two for race three.

Fischer took fifth, ahead of MGR duo of Ferrer and Noble, with Dussault, Edmonds and Butel closing out the field.