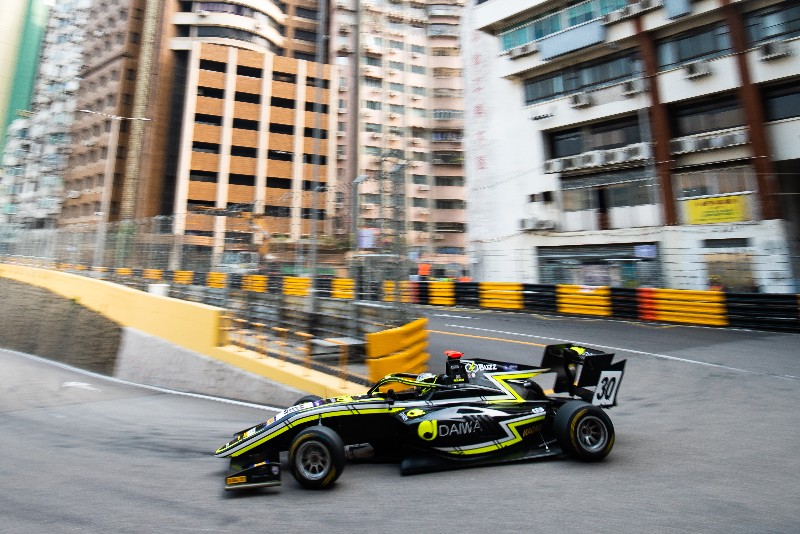 The 3.4-litre V6-powered car, which is capable of 380bhp and was used in FIA Formula 3 Championship this year, is heavier but more powerful than the Dallara F317 which previously raced in the Macau Grand Prix.

In the first free practice session of the weekend, Armstrong broke the 2m09.910s track record set by Ticktum last year, and in the first qualifying session that was bettered by over a second to 2m06.793s by HWA Racelab’s Jake Hughes.

“It’s completely different to last year, so it’s going to be a learning experience not only for the new guys, but also for the more experienced guys.

“Tomorrow is going to be quicker. The track is going to improve a lot. Just put your balls on the table and hope for the best.

After being second fastest to Armstrong in FP1, Hughes put himself in provisional pole by topping the first of two qualifying sessions.

“In the straights we’re going a decent chunk quicker than I’m used to around here, with DRS as well,” said Hughes. “Lisboa is quite interesting now.

“The car itself I was pleasantly surprised, because it’s a bit heavier, bit more power than the old car used around here.

“I expected it to be, not a handful, but a little bit not as nimble. But in the mountain section I was quite surprised, with the downforce level we have chosen for here. It doesn’t feel so much slower in the middle sector, but obviously we’re going a lot quicker in a straight line.”

Ticktum, driving for Carlin, has won Macau for the last two years but has not raced in FIA F3 this year like Armstrong and Hughes have. His only experience of the new Dallara is last month’s rain-hit post-season test at Valencia.

“[It feels] different a lot compared to last year,” Ticktum said after FP1.

“The cars are a lot faster, particularly in the straights, which is interesting. You arrive to corners very quickly.

“The thing with the old car, you could carry a little bit more speed in some corners because of the weight, but overall I was expecting this to feel a little bit worse than it did. I was sort of surprised actually that it felt pretty good.”

In FP1, Ticktum was third fastest and was one of the early pacesetters. He will provisionally start sixth for the qualification race, alongside team-mate and highest placed Macau rookie Logan Sargeant.