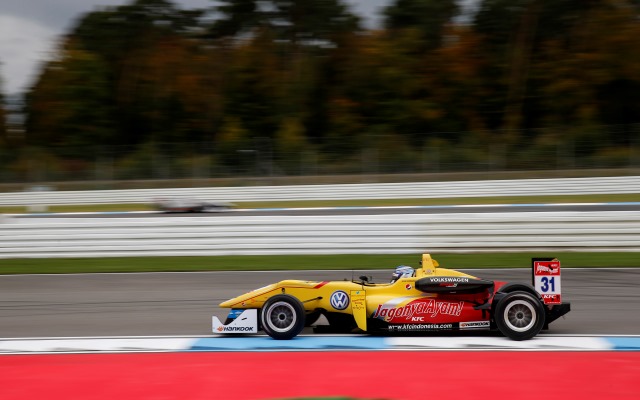 Tom Blomqvist will start the final two races of the FIA F3 European Championship season from pole position after topping the second qualifying session at Hockenheim.

The British driver has just a three-point deficit to Max Verstappen in their fight for the championship runner-up position, and earlier saw the Toro Rosso recruit claim pole for race one.

In the second session, Blomqvist was the only driver to topple his Jagonya Ayam with Carlin team-mate Antonio Giovinazzi, who had sat on top spot during a late red-flag stoppage.

Blomqvist first set a time that made him the only driver to go below the 1m32s mark, and then improved further to finish up with a 1m31.817s, 0.335s ahead of Giovinazzi.

Lucas Auer held on to third place after the stoppage ahead of Jordan King and Felix Rosenqvist, who both bettered a late improvement by Esteban Ocon to demote the champion to sixth.

Antonio Fuoco was seventh, while an impressive Tatiana Calderon leapt up to eighth at the end to force Verstappen down to ninth place. Sean Gelael completed the top ten in the third Jagonya Ayam entry.

For race three, Auer will join Blomqvist on the front row of the grid, with Rosenqvist third and Blomqvist down to fourth. King and Ocon will share row three, with rivals Fuoco and Verstappen on row four. Gelael and Gustavo Menezes will be ninth and tenth.