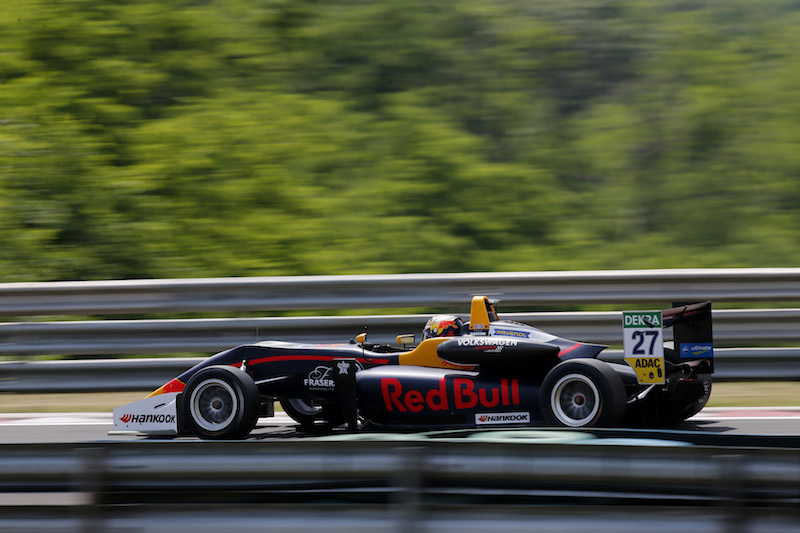 Dan Ticktum and Enaam Ahmed shared the two pole positions on offer in second Formula 3 European Championship qualifying at the Hungaroring following a titanic scrap between the two British prospects.

Hitech-run rookie Ahmed had gone more than three tenths of a second clear of a pack of Prema drivers with five minutes left on the clock, and bettered that by 0.007s with around 90 seconds remaining to seem all set for race two pole.

Ticktum had earlier fallen 0.032s short of Ahmed’s previous benchmark, but he pulled out a 1m34.937s with virtually the last lap of the whole session to come out on top by 0.023s.

Ahmed did repeat his Pau feat of taking race three pole with the best second-fastest time, with race one winner Ticktum to join him on the front row.

Guan Yu Zhou closed in the fighting Brits with a late lap that was only 0.056s off pole and good enough for third, with team-mate Marcus Armstrong seeing off Ahmed’s colleague Alex Palou for fourth.

Jehan Daruvala produced the best performance for a Carlin driver this weekend in sixth, and will start fourth for race three behind Armstrong and ahead of Zhou.

Palou will drop to seventh behind Robert Shwartzman, who was seventh fastest overall in front of Ben Hingeley, Ferdinand Habsburg and Fabio Scherer.

Mick Schumacher went quickest with six minutes remaining but failed to improve his time and was shuffled back to 11th place.

He will move up to ninth on the race three grid behind Juri Vips, who will be 12th for race two.

Ralf Aron could only manage 15th on the grid for both races, with fellow Pau winner Sacha Fenestraz 13th and 12th.