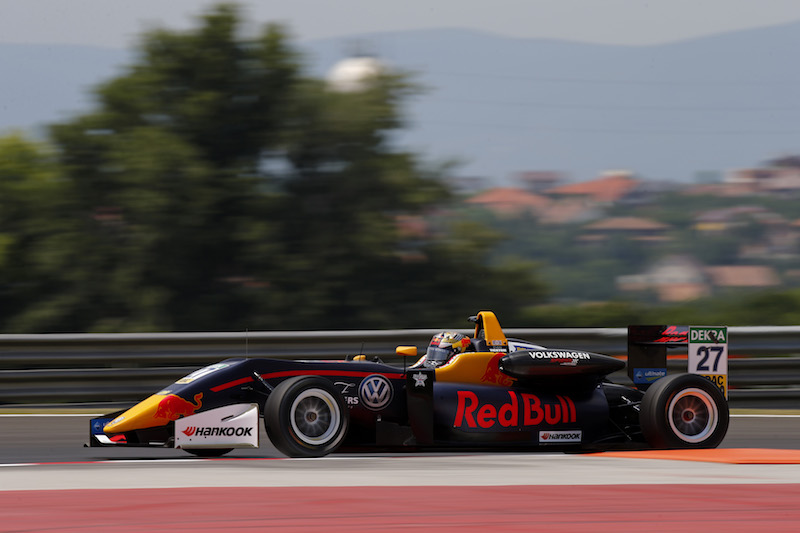 Dan Ticktum converted pole position into a commanding first victory in the Formula 3 European Championship in race one at the Hungaroring, despite being passed by a fast-starting Marcus Armstrong.

In his second weekend driving an F3 car, Ferrari protege Armstrong came from fifth on the grid on a damp track to pass pole-sitter Ticktum down the inside of the first corner.

However, there was contact mid-corner between Ticktum’s front wing and Armstrong’s left-rear tyre that gave the Kiwi a puncture, allowing Ticktum back into the lead into Turn 2. The clash is under investigation.

Ralf Aron came from the rear of the Prema quintet in seventh on the grid to move up to second past Armstrong, but was later given a five-second penalty for a jump start.

The Pau Grand Prix winner was unable to keep up with Ticktum anyway, with the Red Bull-backed Motopark driver finishing five seconds clear.

Aron’s penalty dropped him back to fifth behind his remaining team-mates Guan Yu Zhou, Robert Shwartzman and Mick Schumacher.

Lead Carlin driver Ferdinand Habsburg leapt from 11th to fifth on the first lap and then took fourth from Shwartzman around the outside of the chicane, but wheel-to-wheel contact between them appeared to break a rim on the Austro-Hungarian’s right-rear wheel and he slowed with a deflating tyre.

Alex Palou was 12th after repeating the very slow getaway from second on the grid that he had in the last race in Pau.