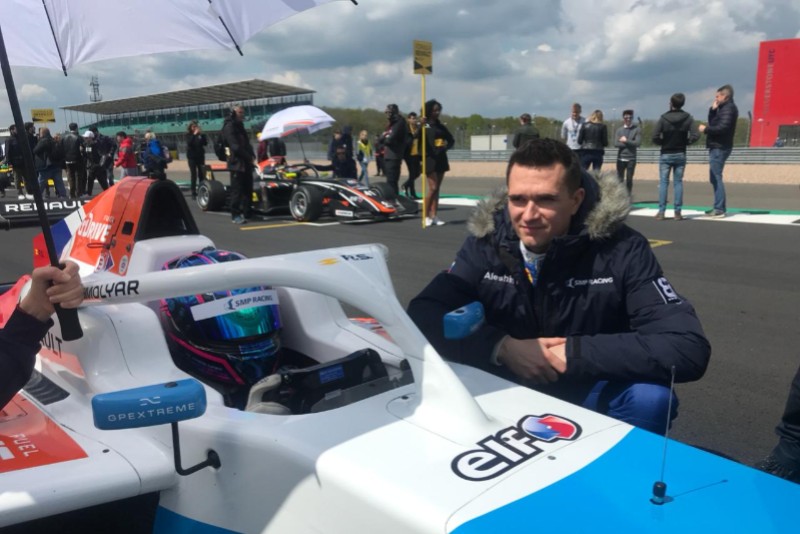 This weekend’s Russian Grand Prix continues a rare trend in Formula 1 of having a local driver on the grid for every running of the race. There’s a grand plan in place for that to continue…

While Mikhail Aleshin never made it to a F1 seat, he tested with Red Bull and Renault and is one of only four Russians to win an international single-seater title. His is perhaps the most important too, being the 2010 Formula Renault 3.5 champion.

Aleshin started racing cars eight years prior, in a racing world unrecognisable to the one he thrives and teaches in today with SMP Racing, a Russia-focused driver development and multi-discipline motorsport programme.

“When I started, I just had my dad, and [Minardi tester and future Le Mans 24 Hours class winner] Sergey Zlobin that helped me a lot,” Aleshin tells Formula Scout, shortly after taking Blancpain GT Series victory at Silverstone, his first win since FR3.5.

Lukoil Racing ran Aleshin for four races in Russian Formula 3 in 2002, shortly before the championship shut down. Was it a series with a professional approach for young drivers?

“Yeah, very professional series,” Aleshin sarcastically replied. “We had a year-old car, and I think that I probably still hold the record of being the youngest official F3 championship competitor, because I was only 14 years old in my first race. 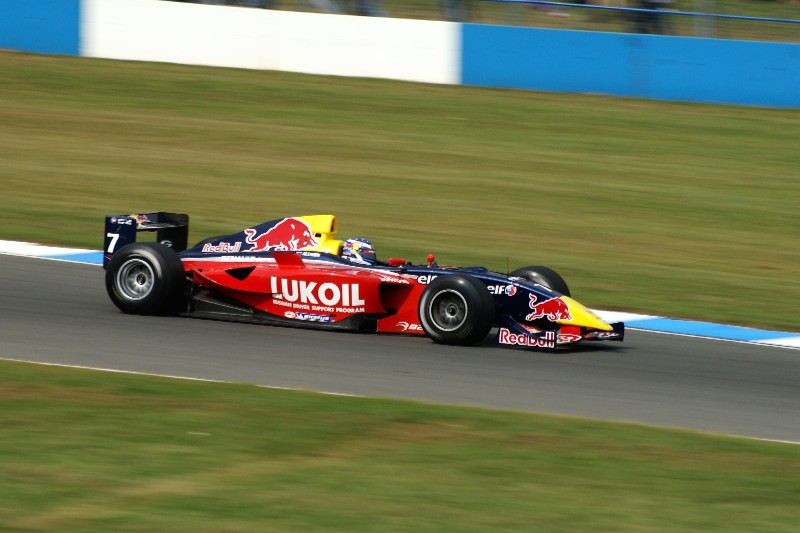 “Most circuits in Russia [built since] are really tight and twisty except Sochi, and probably Moscow Raceway.

“It?s better than nothing. When I started, there was nothing. We had zero tracks. For example one Russian F3 track was in front of an old football stadium, and there was lot of [good] roads so they made the track there. The other track was an old airfield – basically, it?s all the old airfields. Like with really big ruts, the asphalt was horrible.”

Aleshin then headed to Formula Renault 2.0 in Europe, winning the 2004 Italian winter title and finishing second in the German championship a year later as a Red Bull junior. In 2006 he started a lengthy association with Carlin in FR3.5, but only picked up one win in three seasons. Red Bull sent him to the brand new FIA Formula Two next, but after failing to win the title there he lost his F1 backing.

Carlin had become the team to beat in FR3.5 in Aleshin’s absence, and the budget-drained Russian returned to both in 2010.

“Everything worked out quite well but quite difficult at the same time,” Aleshin explains. “Because I had a deal with Trevor Carlin before the year, but then I had a problem [leaving Red Bull] and I had an issue with sponsorship. Trevor did something that I still have not enough words to thank him. He didn?t refuse to make what he?s supposed to make, because I promised him that we were going to have another deal, and we?d have another sponsor but it was going to take some time. 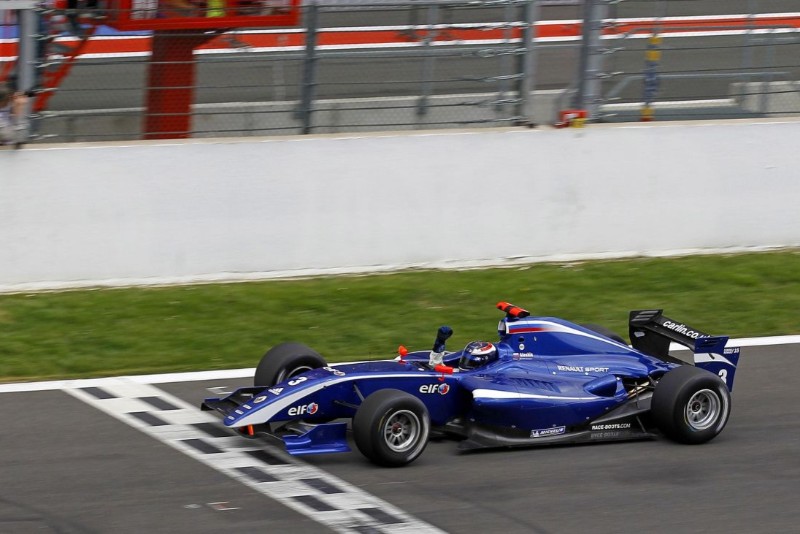 “If you remember the first couple of races, the car was completely clean. It had no sponsors. And Trevor just trusted me, and in the end we won the title. Financially, it was fine as well. Seriously, I still have no words to thank Trevor enough for that, because I mean that?s an amazing story. And you don?t see this, not very often, but at all.”

The title fight was unsurprisingly not the biggest pressure for Aleshin that year, rather “making everything what I promised Trevor, finding the sponsors and making this [situation in 2010] good for everyone”.

“That was quite difficult, because I needed to race, I needed to find sponsors, but Trevor waited and it paid off.”

Beaten to the title by Aleshin was Red Bull junior Daniel Ricciardo, by just two points after a final race showdown at Barcelona.

“Daniel was quite close to winning the title, and definitely he?s a quite [very] talented driver and he?s an awesome guy. If he?d won that title it wouldn?t have been a big surprise. But we had really clean fights in the end, we had the same points before the last race and had a really clean fight in the rain. In the end, I became the champion, he was second. But, you know, he became an F1 driver.”

Aleshin’s title prize was a place in the F1 young driver test with Renault, a team leaning on Russian money at the time. Did that boost his chances of a reserve or race role on the grid? A sigh from Aleshin suggests not. 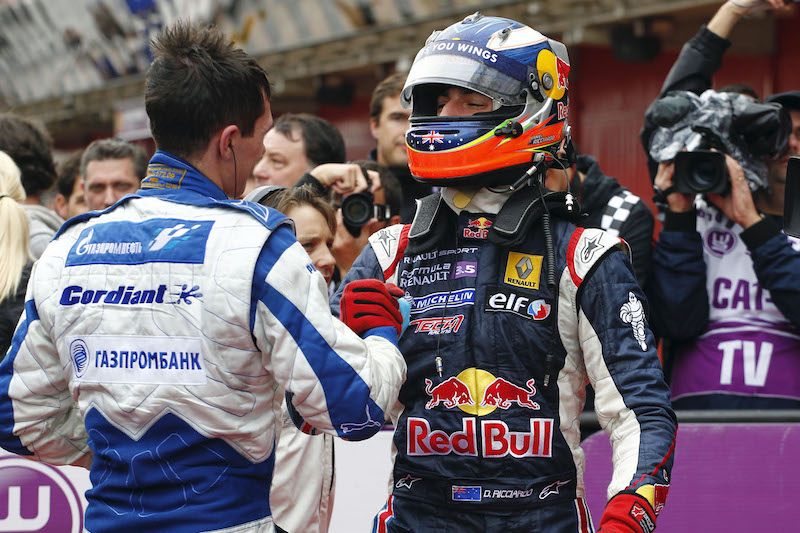 “I didn?t do much in the case of F1, but unfortunately life is like this. You can win FR3.5, you can win GP2, you can win F2 10-times in a row, but that doesn?t give you anything. The only thing what you need to have when you?re going to F1 is unfortunately financial clout.”

Winning Carlin’s first international title did mean Aleshin was called up to help set up its new GP2 squad in 2011.

“Unfortunately, that?s the funny thing, that after I won such a championship, I didn?t have any place to go. I just had no opportunity for F1, and I didn?t want to do any touring cars or anything like this [Blancpain] at that time. Then Trevor offered me to work a little bit to help them set up the new GP2 team, and obviously I did what I could – at the same I was racing, I did a couple of races in the FR3.5 for a different team. And I did one race in Superleague Formula, and I did F3.”

Both Aleshin’s GP2 cameo and German F3 drive with expanding Russian team Artline Engineering are examples of team building and car development that SMP Racing treasure Aleshin’s input in today. At the time though, going down to F3 did seem an odd decision.

“All the decisions in my career were very easy. You need to keep racing, and even if you won a title – you’re the champion and you think that [you?re the best] – sometimes not everything is happening like you want, and sometimes you need to take a step back to go up a gear. For example, let?s say if I would be so upset not to continue racing whatever it is [I?m racing], I would not have been able to race in IndyCar.” 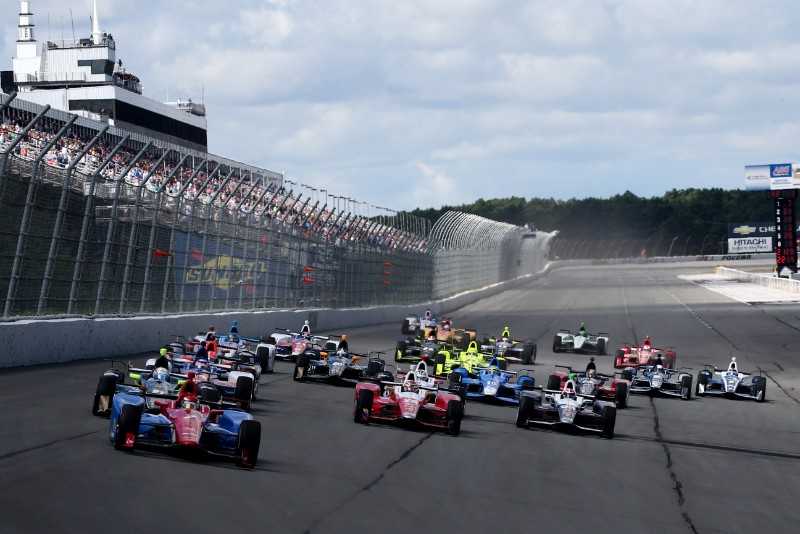 After two more seasons in FR3.5, the creation of SMP Racing by Russian banker Boris Rotenberg enabled Aleshin to finally make it as a professional racing driver in IndyCar with Schmidt Peterson Motorsports – the first Russian to race in the series.

“IndyCar is one of the most interesting cars and parts of my career, for sure. Definitely the toughest car I’ve driven. It?s very fast, it has a lot of G forces, and the races are minimum two hours. I still have some things to achieve there for sure.”

A return in the coming years for the 32-year-old is a possibility, and it would be his second IndyCar comeback.

At the end of his rookie season, which included a second place in Houston, Aleshin crashed in free practice at Auto Club Speedway. His car was thrown violently into the catchfencing and pirouetted multiple times before landing. Aleshin was briefly unconscious, and ended up with a broken collarbone, fractured ribs and concussion.

The lowering of sanctions against Russian money enabled him to return to IndyCar in 2016, where he almost won at Mid-Ohio and Pocono. He left the series midway through ’17 to once again concentrate on SMP, this times with its new LMP1 challenger.

“Of course it’s difficult [developing start-ups], it’s always nice to come to everything set and ready to win. But at the same time, this SMP Racing team that we have – it?s a Russian team and a Russian car, and everything and every stage of when they built the car, let?s say I was looking at it, I was there. 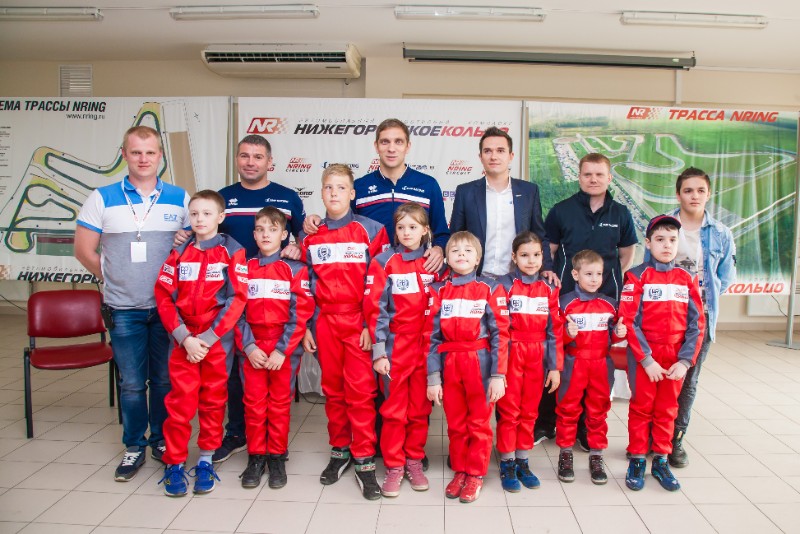 “I was the first guy on the track inside this car. I?ll tell you, it?s a very interesting job. You need to drive with a different style [to single-seaters], there is a lot of heat in the car and stuff, but it?s very cool because for example take this [Silverstone] race. How many – there is 50 cars, competitors, driving around you. Where else would you have that?

“Not every driver can say that he was developing a LMP1 car. I can tell you it?s a really interesting and really important job for any driver that wants to improve his engineering skills and stuff, because that?s going to help in the future for sure.

“You need to change your driving a lot, but hey, you?re a professional so that?s what you need to do anyway. It?s not a problem for me so far since SMP Racing’s existed, and we have so many opportunities for us and for the young drivers to compete in different championships.

“The point of this programme is to raise talents, and that?s what we are doing. It?s quite interesting, and I would say that it?s the only one in the world that has it?s own [niche].”

Which brings Aleshin to his third defined role at SMP: driver coach. Is it as rewarding as racing and developing cars?

Aleshin sighs: “Yes. And I?ll tell you you definitely spend not less nerves on that, maybe even more than on your own career.” 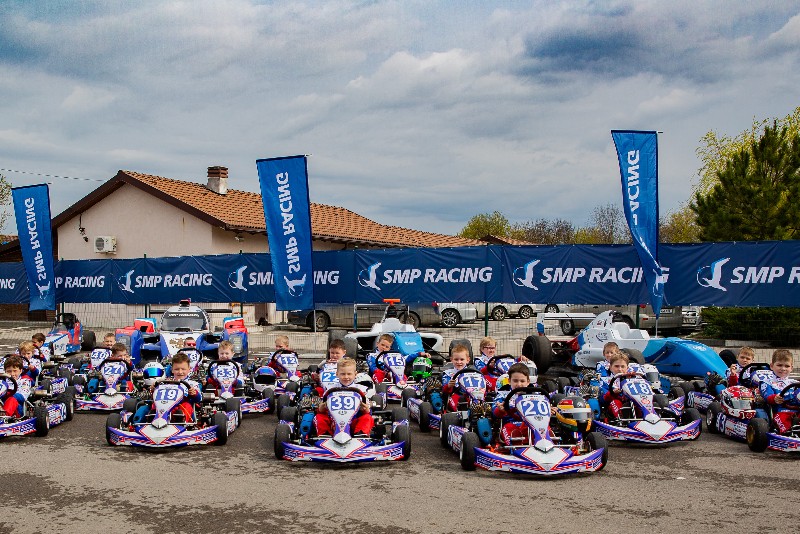 SMP’s original pitch to Aleshin was to be a driver, but it wanted to utilise his experience to guarantee long-term success and coaching was quickly added to his responsibilities. Several of Russia’s other top racers have been convinced to take on the job too, with F1 podium finisher Vitaly Petrov having worked with FIA F3 Championship leader Robert Shwartzman this season.

“We try to have drivers that are already doing some steps in professional karting – from Mini to OK,” Aleshin says of SMP Racing’s young driver strategy, in which his father Peter has long played an important role. “We?ve done something really interesting, called like a ?Hobby local championship?. We take the top three [from those championships] and help them [into the national championships] and to build a career.

“There are two guys that are actually quite good. They never did anything [prior], let?s say, and that?s amazing that they?re now in the national championship and kicking ass there. So here is why the programme exists.”

Despite having already raced in F1 with Williams, 24-year-old Sergey Sirotkin is named alongside 20-year-old Shwartzman as “the future” by Aleshin, together with the aforementioned karters.

Aleshin heads into this weekend with only one eye on Shwartzman’s title-deciding FIA F3 races on home soil at Sochi, as he’ll be racing for the Blancpain Endurance Cup title at Barcelona, which SMP Racing is currently favourite for. But as has been the case at several events this year, he’ll be able to support SMP’s Formula Renault Eurocup frontrunenr Alex Smolyar.

Given his driving career now lies in sportscars, do all SMP Racing juniors have their talents shaped towards F1?

“It will all depend on persuasion because not everybody wants to go sportscars. I think it?s always good to have in mind a aim like F1, but I? also think that if you like racing then you can like any kind of racing. Like I do.” 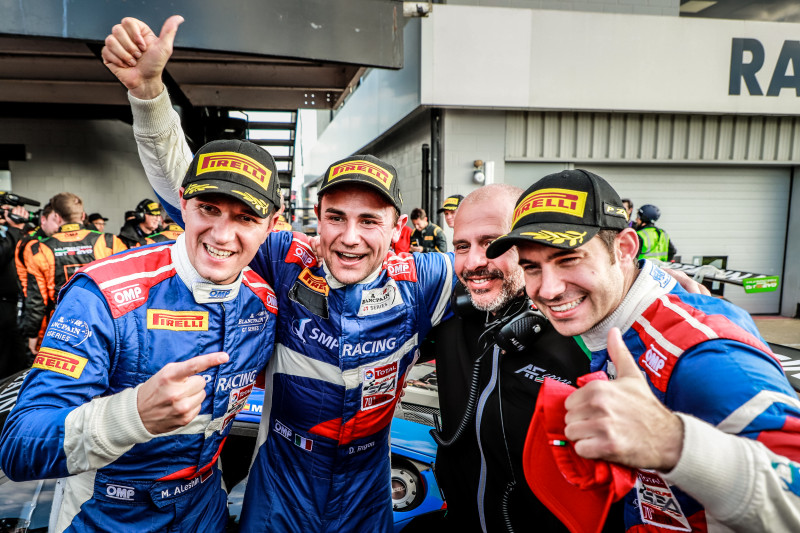