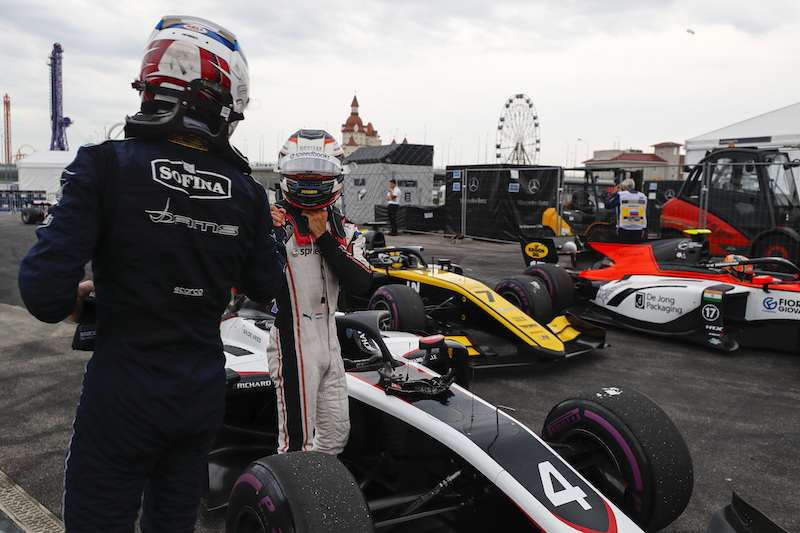 De Vries, announced as a Mercedes Formula E driver since the last round at Monza, now leads the F2 drivers’ championship by 63 points and can clinch the the title in Saturday’s feature race. Latifi will line-up second on the grid.

Williams reserve Latifi – searching for his maiden F2 pole position – posted the fastest time in the opening exchanges, edging de Vries by 0.055s after the first laps of the 30-minute session. The DAMS driver then extended his advantage and was the first to dip into the 1m47s.

But de Vries responded in the second half of the session, stealing pole position with a 1m47.440s and while Latifi improved on his penultimate effort, he could not overhaul the points’ leader.

Monza polesitter and Ferrari academy driver Callum Ilott was third for the Sauber Junior Team by Charouz, only missing out on a front row start by 0.037s.

The Virtuosi pairing of Luca Ghiotto and Guanyu Zhou ended up fourth and fifth, gradually climbing up the order and gaining speed as the session progressed.

Sergio Sette Camara suffered a huge lock-up at Turn 13 on his fastest lap, still managing to clip the apex en route to sixth on the grid fro DAMS.

Louis Deletraz was seventh, while his Carlin team-mate Nobuharu Matsushita was another driver to flatspot a left-front tyre at Turn 13, having to bail out of his second timed effort of the session and complete his final run in the gap as a result. He vaulted from 13th to sixth, eventually sliding to 10th.

Nikita Mazepin and Jordan King qualified ahead of the Honda junior into eighth and ninth respectively.

Jack Aitken was only 12th for Campos after his first run was derailed when he made contact with Trident’s Giuliano Alesi, breaking his front wing. The incident is to be investigated by the stewards. Alesi escaped damage and ended up qualifying in 14th.

F2 veteran Artem Markelov returns to the series at his home event, driving alongside Tatiana Calderon at Arden. Eight-time race winner Markelov qualified in 16th, ahead of series debutant Matevos Isaakyan in 17th for the Sauber Junior Team.