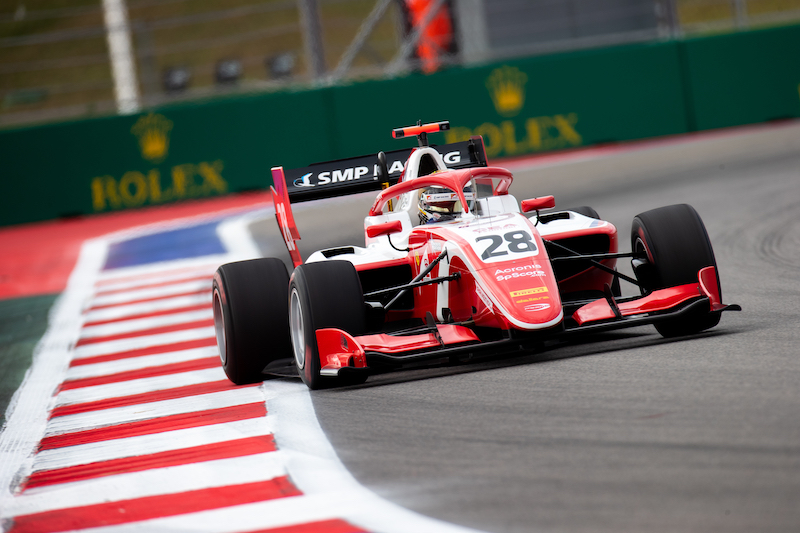 Robert Shwartzman moved closer to claiming the FIA Formula 3 title on home ground in Sochi by taking pole position in a Prema 1-2-3 in qualifying.

By taking his first pole – and front row start – since the opening round at Barcelona, Shwartzman gains four extra points to increase his lead over team-mate Jehan Daruvala to 37 points with just 44 left up for grabs across the weekend’s two races.

Shwartzman led the order going into the final runs with fresh tyres at the end of the session, which began with the Trident duo of Pedro Piquet and Niko Kari briefly taking turns on top.

Daruvala then went quickest, only for Shwartzman to outpace him by 0.13 seconds. The third Prema driver Marcus Armstrong then came up just 0.013s short of Shwartzman’s time after going fastest in the final sector.

On the second and final flying laps at the chequered flag, Daruvala once again claimed top spot only to be beaten by Shwartzman, this time by 0.192s.

Armstrong, running further behind on track, backed off and didn’t complete the lap, complaining over the radio to his team that “all I ask for is no traffic”.

Kari was consistently the fastest of the non-Prema cars and finished up fourth, six tenths from pole.

Christian Lundgaard was fifth for ART ahead of HWA’s Jake Hughes, with Piquet seventh.

Leonardo Pulcini beat Hitech team-mate Juri Vips to eighth, with Max Fewtrell rounding out the top 10 in the second of the ART cars.

Red Bull juniors Yuki Tsunoda and Liam Lawson, who finished one-two in the last race at Monza, were 17th and 23rd respectively.

David Schumacher was 25th on his debut in place of the injured Alex Peroni at Campos, with fellow newcomer Charles Leong rounding out the 29-car field for Jenzer Motorsport.