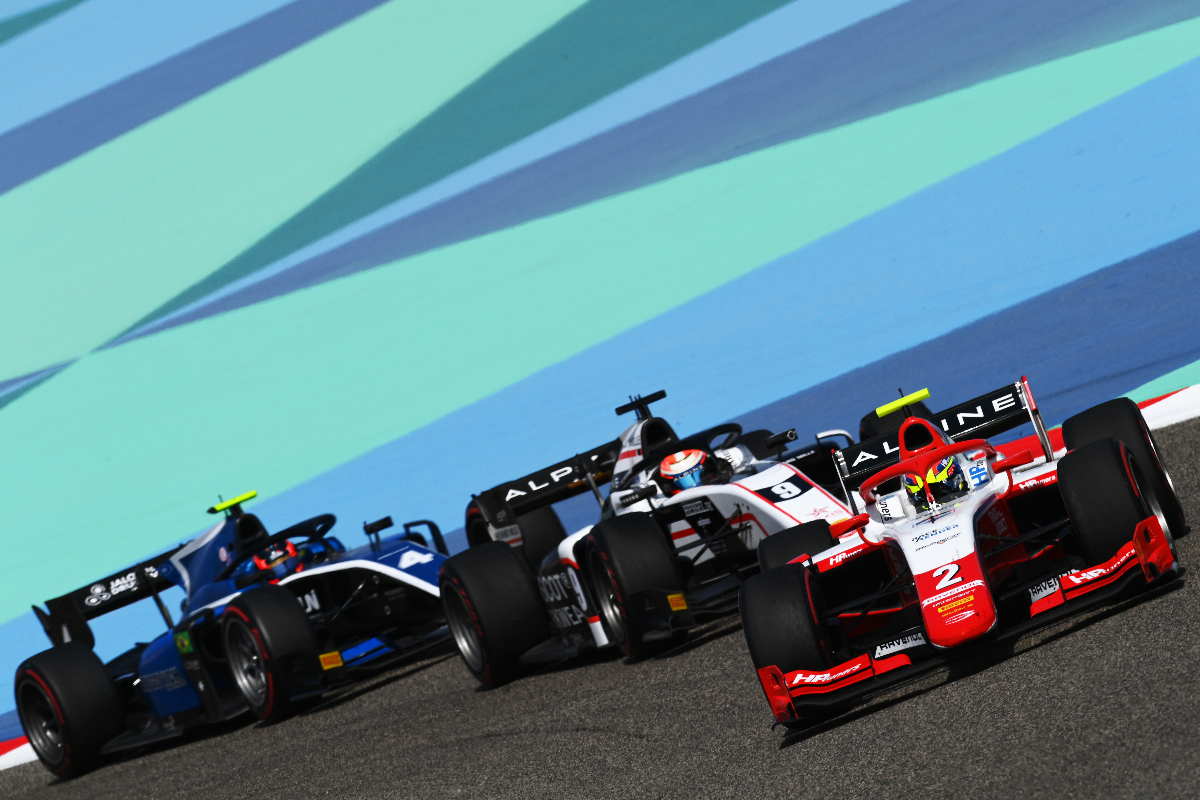 In the latest Formula Scout Podcast, a big discussion topic was the impact of Formula 2’s new weekend format. There was action everywhere, but how much of it was an effect of the format change?

Formula 2 returned in Bahrain last weekend with a new look. The hour-long feature race had moved from Saturday to Sunday, with the sprint race action now on Saturday. The 45-minute reversed-grid encounter now had a new template, with the top 10 from qualifying being used rather than the top eight from the feature race to set the grid, and in addition to that a second sprint race was added on Saturday evening that also used a reversed grid but taken from the top 10 finishers in race one.

Each race was won by a different driver in Bahrain, with the sprints going to drivers in their first weekend in the series. It was ultimately knowledge of the Pirelli tyres that decided the result of the feature race.

Listen to the accompanying podcast, or find it on Breaker, Google Podcasts, Overcast, Pocket Casts, RadioPublic, Castbox, Apple Podcasts and Spotify, and read on for what the Formula Scout team and the F2 drivers thought of the format change.

Bethonie Waring: It played out fine. I don’t really have much of an opinion on it. I’m kind of reserving judgement until we’ve seen it a couple of times. I had a realision this weekend as well that having the feature race last probably isn’t a good thing if Formula 1 qualifying for example had to be postponed, and knock backs on the F2 race if it had to go on on Sunday. But hopefully that’s not something that’s going to happen. Overall, it was alright. I’m still not sure about the fact you can earn more points from the two reversed-grid races than you can from the feature races, but we’ll see how it goes.

Elliot Wood: With Bahrain having lots of run-off; obviously drivers were very cautious in race one, but for race two they dropped the caution because there was less at risk. With four street circuits this year and Silverstone as well, where if you have an off at high speed, yes there’s run-off but you’re probably going to hit something. I think Bahrain’s going to be an exception almost, I think drivers are going to be a lot more cautious going through this season. We’ve got another test before the next round so there’s going to be more mileage on components as well.  I think teams are just going to be pushed on budgets, so drivers wont be providing the same amount of entertainment as Bahrain every time.

Josh Suttill: It did provide a lot of excitement, was that down to the format?

Craig Woollard: I’m very glad that F1 managed to have an absolutely scintillating season opener without any manufactured grids or anything like that. Because while F2’s new format has proven to be exciting off the bat, I don’t want Formula One Management or the FIA or whomever to use that as justification for applying a load of gimmickry to F1.

I think generally people quite enjoyed it. The drivers seemed to cautiously enjoy it, although they’re not necessarily particularly fond of the grids being flipped so many times. I’m certainly reserving all of my judgement more for when we do get to some tighter street circuits such as Monaco for example where overtaking is pretty much impossible.

Bahrain generally with F2, it’s always absolutely exiting from start to finish, with the peril of possibly having sprint race pitstops [due to the abrasive asphalt] and a feature race held in conditions where the track pretty much just destroys the tyres. 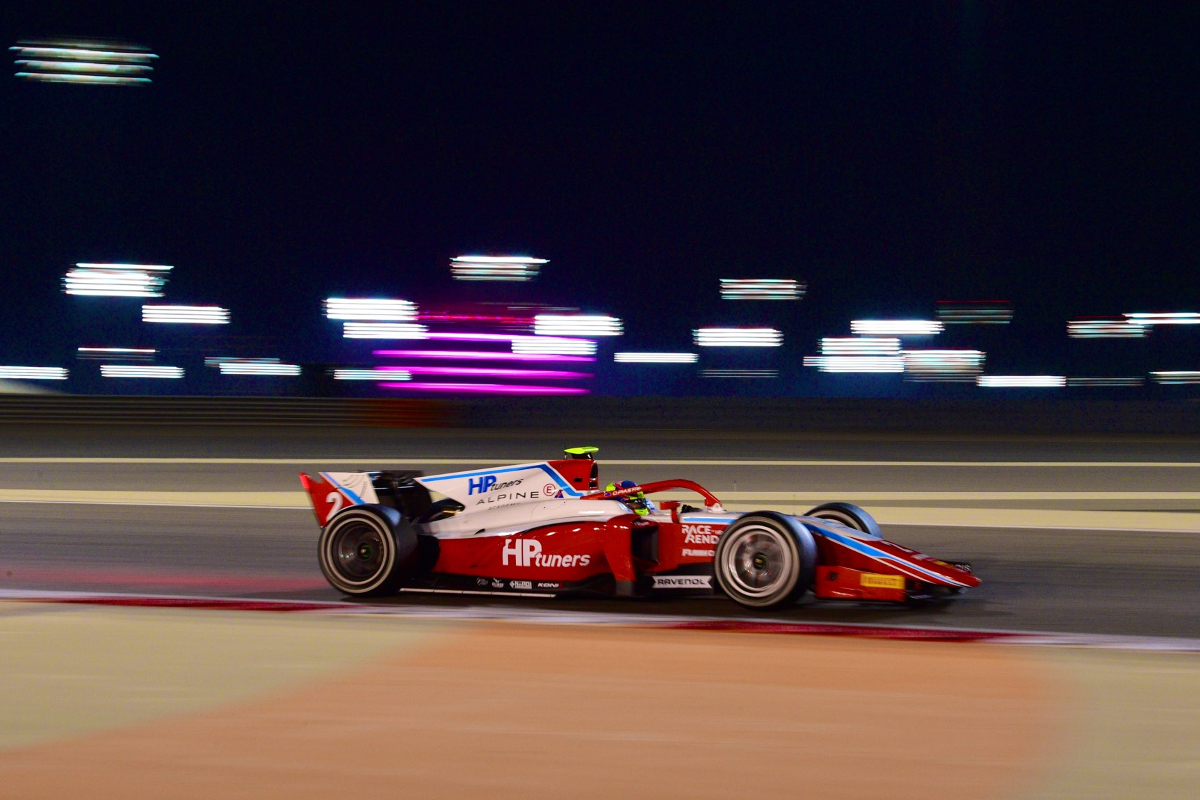 So I don’t think it’s at all surprising that this format likewise was very exciting. One thing that has been whirring around my head for a little while is that if the format is going to make the championship even more competitive than what it is, I’m sat here thinking we might have 12 different race winners from seven different teams again like we had last year – but all of them could well be championship contenders now. That means at least two drivers who could be vying for a title are going to come away with zero superlicence points from this championship this year. And I find that absolutely crazy to even comprehend.

I do wonder if whether with a bit more of a conventional format, that we may have slightly bigger gaps in the championship at the top. But is that worth the trade-off at the end of the day? There is no sort of right or wrong answer. It’s always down to an individual person’s interpretation of it. I personally would like to see a bit more fluidity with how a weekend goes, having it a bit more conventional, because I think F2 is exciting enough without having all of the randomness and things like that to really shake things up more than it perhaps necessarily needs to be.

JS: It can be organically random, rather than artificial means to make it random. It’s kind of random on its own.

JS: If I had to make a very small change, and you had to keep three races, I would just simply make the first race not a reverse grid, and just use the results of qualifying or the second fastest times in qualifying. Even if they want to keep it as a sprint race, just set the grid from qualifying. It does seem a bit daft to have two reversed-grid races out of three, is a little extreme.

We get mixed enough grids anyway, just look at the qualifying results from last year and it was pretty varied between most of the field. I don’t think it’s a huge issue, or it wasn’t really a big problem and something that needed to be done. Equally perhaps as well, changing it to the top 10 as well that gets reversed is perhaps a little bit extreme, but I guess it’s something the midfield teams in particular will be very, very happy about.

What the drivers said 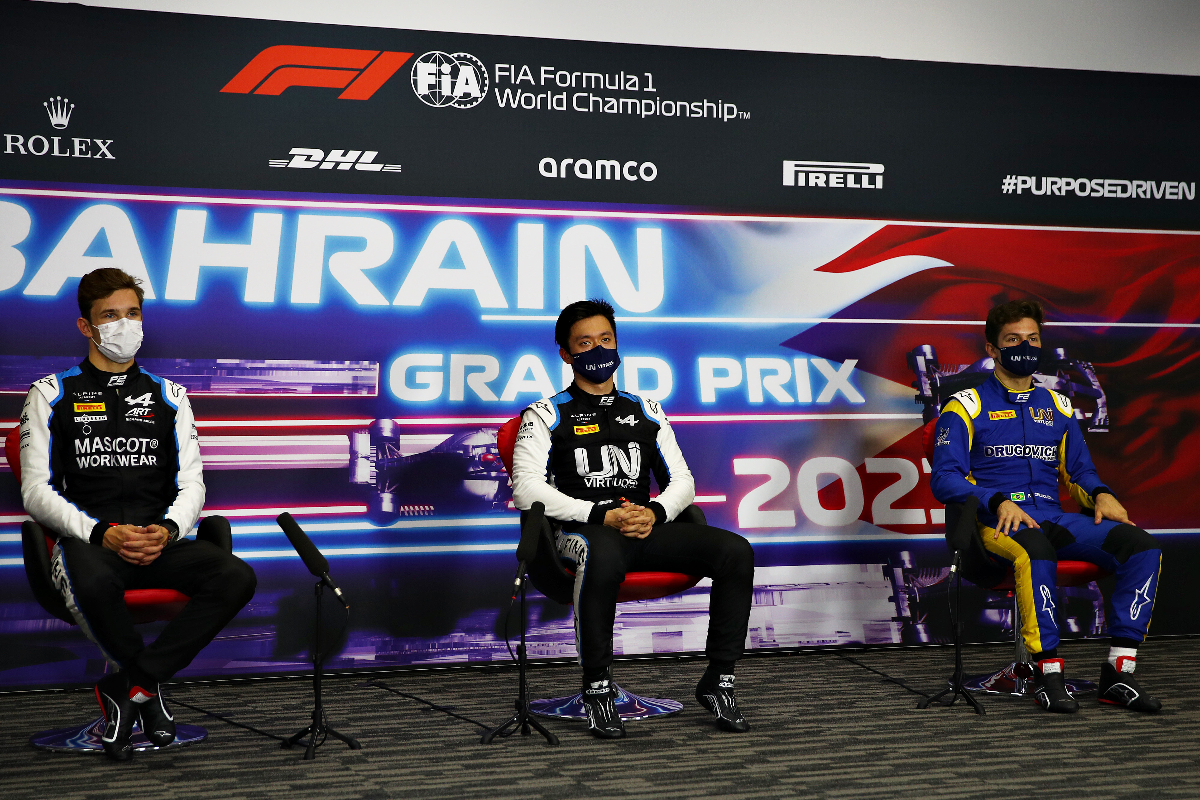 Christian Lundgaard (ART Grand Prix): If you had a problem in the feature race [in the past], your sprint race was kind of difficult. You don’t have a proper starting position.

Whereas now if you do well in race one but you have a problem in race two, it’s not the end of the world for race three which is the feature race. So even with a DNF we still have opportunities, and I think that’s great, that’s something we need to take advantage of.

Formula Scout: Have emotions after qualifying changed due to the format change?

Drugovich: I think in some way it takes off a little bit of pressure for the first day, for Saturday. Because in the end the main race is on Sunday and Saturday is just trying to recover as much as you can, and I think in the end the best approach is just to have fun and to overtake guys and prepare for Sunday’s race.

Guanyu Zhou (Virtuosi): A strange feeling, starting further down, but at the same time I think we get that first race to be more understanding of how the tyre degradation went to be more prepared for the final race.

Lundgaard: Actually I very much agree with Zhou’s comment. I think it’s very good for us now to be midpack to really get a feel for it, and to get the car sorted for Sunday where we can do the biggest difference and score the biggest points. 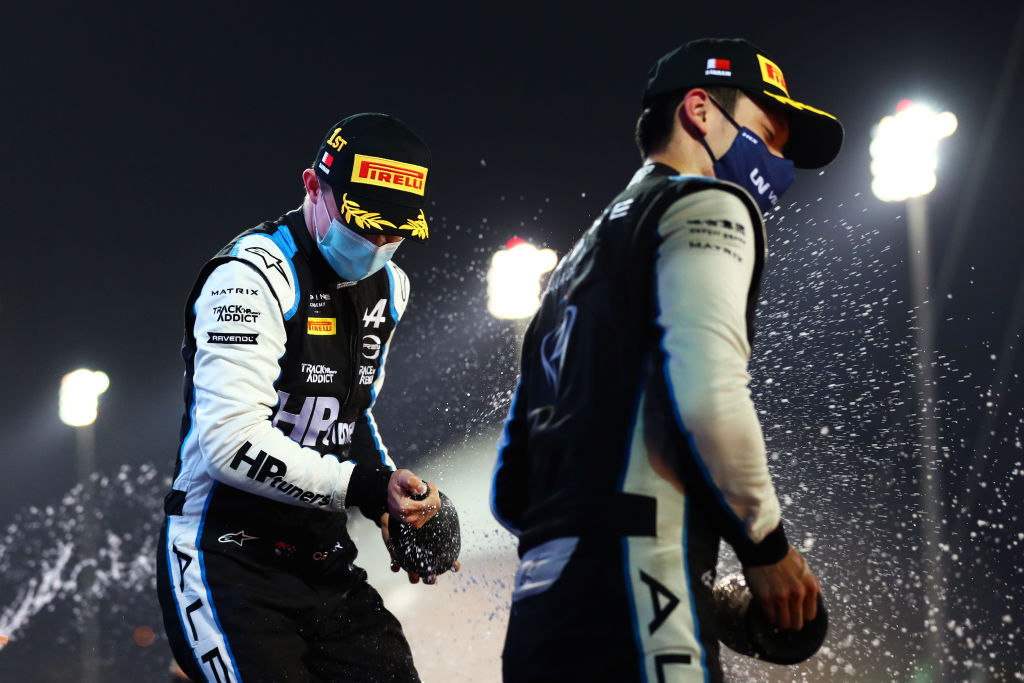 Oscar Piastri (Prema): I’m sure it’s proved to be exciting. I don’t know about the rest of the action through the race but from my point of view, it was pretty exciting. The format’s good, we’ve still got the main race tomorrow but if I can have a few more weekends of reversed grids like that, then I’ll definitely take them.

FS: How are you feeling after having done two races in a day?

Zhou: Mentally it’s a pretty long day, especially Saturday, and physically it’s pretty fine. All the drivers are well-trained to be prepared for each season.

Piastri: The last time I had multiple races in the same day was Formula 4, so quite a while ago now. I’ve enjoyed it. Obviously I’m on a bit of an adrenaline high at the moment so that is explaining most of it. But physically not too bad, the race earlier today was very hot but physically like Zhou said we’re all well-trained, we’re all trying to get to F1, so we’ve got to be able to handle an F2 car before we can handle an F1.

Mentally like Zhou said as well, it’s a pretty long day, particularly for me having my first F2 race and trying to process everything that I need to adjust in the space of two or three hours isn’t the easiest task, and then trying to get a bit of downtime in as well. So I’m pretty sure I’ll sleep good tonight and be raring to go again tomorrow.

Jehan Daruvala (Carlin): It makes the racing very entertaining, like we saw today. All in all, I don’t think there’s too much to worry about from my side with the format, wherever you start you just want to move forward so with the format, it is how it is. 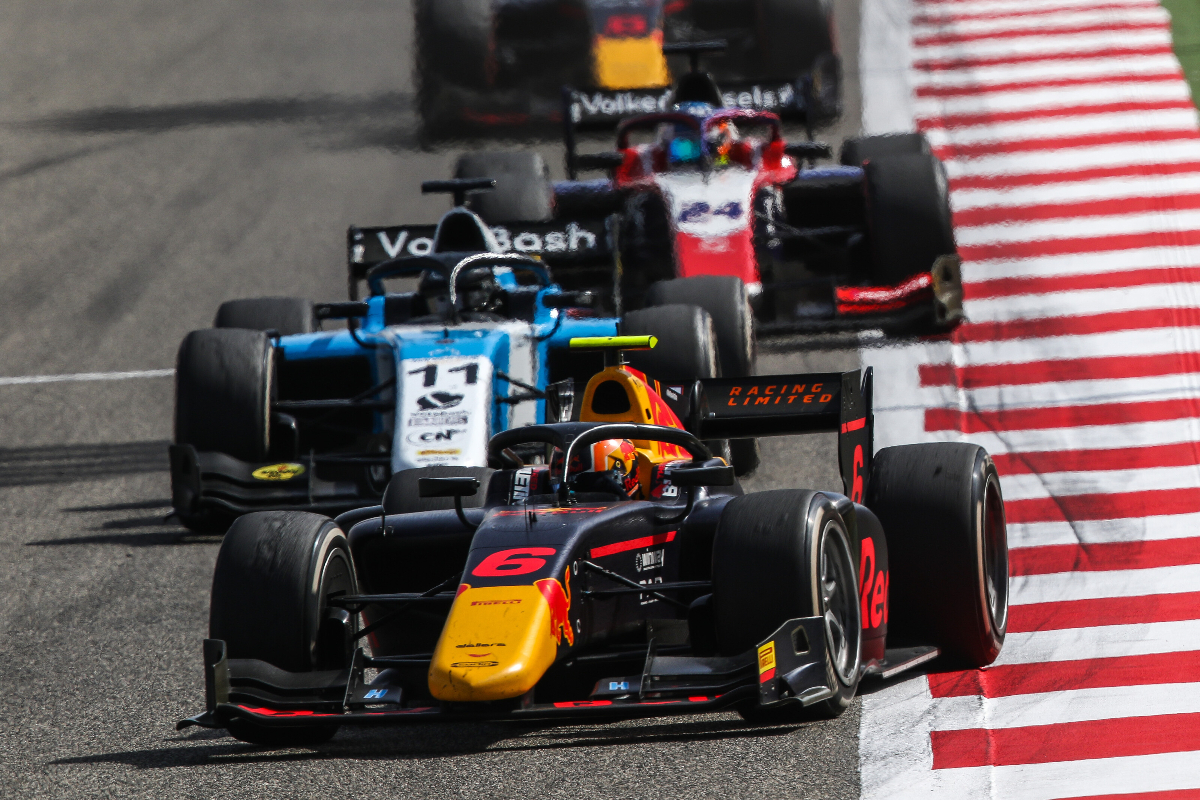 Piastri: To be honest I’m pretty opinionless on the format. Liking it quite a lot at the moment, but it’s just a little bit risky if you qualify at the front for race three.

Ask us again after Monaco, we might have slightly different opinions, but I think the format’s providing very exciting races.

Zhou: Exciting races, but in the end I felt to be on pole it’s good to have the extra points but if you qualify top three, there’s a huge risk in race one that can impact your race two as my team-mate did, so it can compromise quite a bit your weekend which makes it interesting at the end of the year for the championship, but it is how it is.

It’s definitely great for the fans to be watching three F2 races in an exciting weekend.

After the feature race

Liam Lawson (Hitech GP): For me it’s more races, more time in the car at the weekend so I like it. It was one of the things about racing on the F1 weekend that it was very limited track time, so it’s pretty awesome to get more time racing.

Dan Ticktum (Carlin): Eventful. I think that’s the word that we used after the first question 10 or so minutes ago.