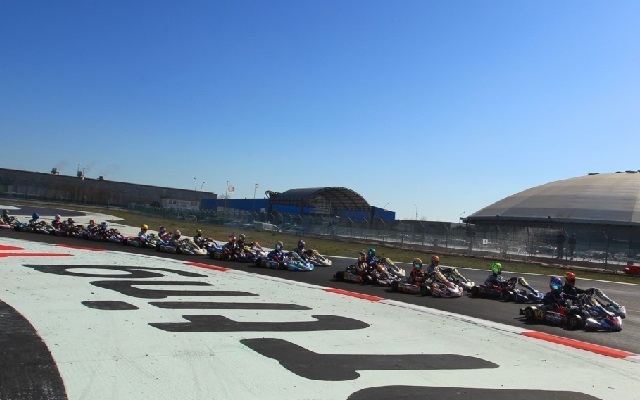 The second part of Gruz David’s look this week at the international karting season so far focuses on the junior category.

The KFJ category, for drivers aged between 12 and 15, provides the first opportunity in a driver?s career to contest international championships organized by the FIA. Each year a new wave of youngsters from national karting enter and the best will always be seen as big future single-seater prospects.

With the F4 level of single-seater racing appearing, many drivers from the 2014 class graduated to cars, making room for a new generation. American Logan Sargeant returned for a third KFJ season, having been too young to move up the ladder. Having showcased his talent on numerous occasions already, he started the season as one of the favourites and expectedly grabbed pole position for the first WSK Champions Cup round final.

It was never going to be easy in this competitive field though and Sargeant had to face the challenges of Christian Lundgaard, who stepped up to be his main rival. In the wet final the Dane overtook Sargeant and confidently claimed the victory, while Sargeant ended up behind Felipe Drugovich in third following a spin on the kerbs.

Lundgaard, still only 13, was back on even stronger form in the second meeting of the championship. Having topped every session previously, he led the pre-final confidently as well, however, a technical problem ended his winning streak. Fixing the problem on his own, he managed to recover in 16th which narrowly qualified him for the final. As a result it was Sargeant and Drugovich starting from the front row of the deciding race and the American ran away in first.

He was not troubled under dry circumstances but as they were reaching the final laps of the race, rain hit the track. Sargeant made two mistakes in just a couple of corners by first running wide then spinning but as the red flag was out prior to those faults, he was allowed to stay ahead. The track not being too wet, most of the field restarted on slicks with the exception of Bogdan Fetisov, who soon found himself in the lead thanks to his tire gambling. Just as he was there though, he started to lose pace and Sargeant was all over him. When he passed the Russian he was still not leading as Kush Maini managed to move ahead on the penultimate lap. However, Sargeant fought back and saw the checkered flag first, followed by Maini and Sun Yue Yang. Lundgaard started 31st but fought his way up to a remarkable fifth but Sargeant?s victory gave him no chance to be the champion. 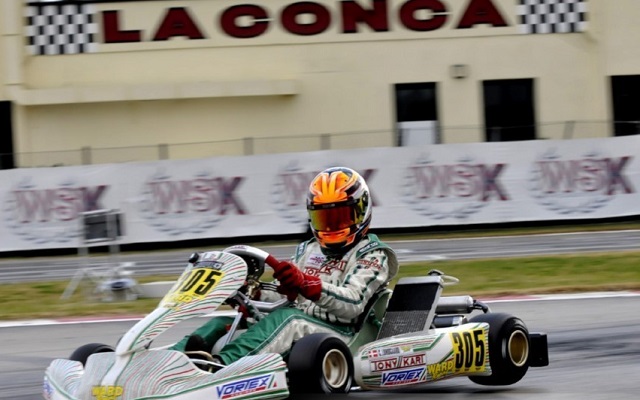 Lundgaard won three of the first four finals of the season (Photo: Press.net)

Sargeant and Lundgaard continued to be the class of the field in the Winter Cup as well. They won every qualifying heat they took part in with the exception of the one they both contested, where Lundgaard had to settle for second behind his rival. Sargeant also topped the pre-final and Yang edged ahead of the Dane. It was all for nothing though as Lundgaard passed both of them during the first four laps of the main race to take the title, followed by Sargeant and Finn Paavo Tonteri.

Lundgaard soon doubled the number of titles collected in 2015 by dominating the WSK Gold Cup. Beginning the race in second, he reeled in race leader Maini in just five laps and cruised to the finish. Fighting for the other two podium positions made for an eventful race among several drivers. After losing the lead, Maini was soon passed by Sargeant and Artem Petrov as well. It was a temporary state however and the younger brother of F3 racer Arjun fought his way back up to second ahead of Sargeant, who continued to finish every race within the top three. 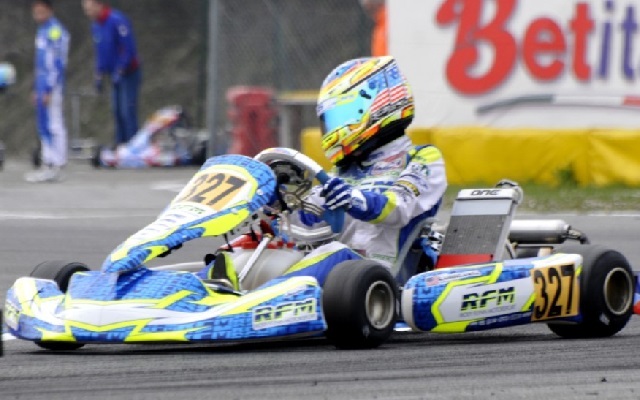 Sargeant became the first American to win in an WSK event (Photo: Press.net)

Winning three races out of four and losing out in the final one by just a technical issue, Lundgaard was the obvious title contender for the Super Masters. It was also safe to assume his main rival will be Sargeant as he was the only one being able to consistently fight at the sharp end. Regardless, a new winner emerged in Clement Novalak, who took a lights-to-flag victory in the opener. Novalak, changing his racing licence from Swiss to British this season, finished two seconds ahead of Sargeant, who was chased by Petrov throughout the race. Although Lundgaard started second, he dropped down following a battle with Sargeant in the early stages and could only recover to fourth.

Lundgaard?s woes continued in round two in the form of incidents in both the pre-final and final and the Dane could only take 13th. The rainy main race soon turned into a duel between front row starters Novalak and Sargeant. The Briton edged ahead at the start and essentially led the whole race with the exception of the penultimate lap, where Sargeant managed to make a move on him. Novalak did not let him get away with that though and won the race, while Sargeant, losing control on a puddle, spun out and finished third behind the Belgian Ulysse de Pauw. At the halfway point, Novalak was leading the championship by an unexpectedly big margain, followed by Sargeant.

Just like in KF, the entry list of the Trofeo Andrea Margutti lacked the field?s usual frontrunners. Without Lundgaard, Novalak or Sargeant, a new champion was awarded in Maini. The Indian showed full control over the weekend by winning every single session and was not challenged by anyone. The podium was completed by the Italian Lorenzo Colombo and the only 12-year-old Spaniard David Vidales. 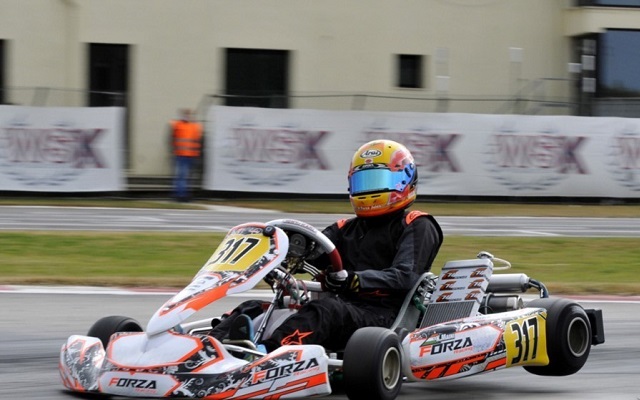 Back in the Super Masters, Lundgaard turned things around by standing on the top step of the podium for the first time since the Gold Cup. Although the Dane led every lap of the race, his job was far from easy as a trio of karts spent the entire race chasing him. Lundgaard showed immense mental strength by not cracking under pressure as Drugovich, Marta Garcia and De Pauw had to settle for second, third and fourth respectively. Sargeant and Novalak once again ended up fighting, this time only for fifth though. In the standings, the top three of Novalak, Lundgaard and Sargeant were separated by 50 points with 140 still up for grabs in the series final.

Novalak and Sargeant kicked the decider off with relatively low-key results, yet both of them made it to the the top three in their respective pre-finals. Lundgaard, on the other hand, started his pre-final from third but was again down on his luck as an incident saw him dropping way down the order. He minimized the damage by taking 11th but that still left him 21st on the grid. As such, the Dane was pretty much out of the title fight, unlike Sargeant, who had a rocket start, jumping into the lead in just three laps. At that point, the American was provisionally the champion but he did not stay in first for long, unable to keep De Pauw at bay. While the Belgian won the race, Sargeant followed him as runner-up which proved to be insufficient, even with Novalak spending a quiet race in sixth. The Briton maintained a lead of 10 and 30 points ahead of Sargeant and De Pauw respectively and became the 2015 WSK Super Masters KFJ champion.

The KFJ calendar included further two, newly-created trophies which had a limited number of entries. The Vega Winter Trophy title, held in the middle of January, was clinched by Petrov and the WSK Nights Edition, obviously held in night time, saw Sargeant triumphing. 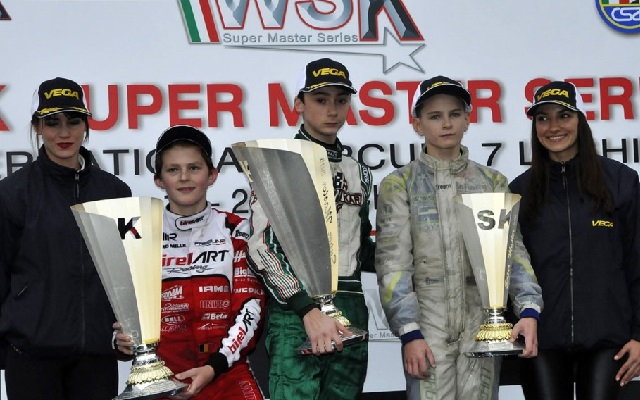