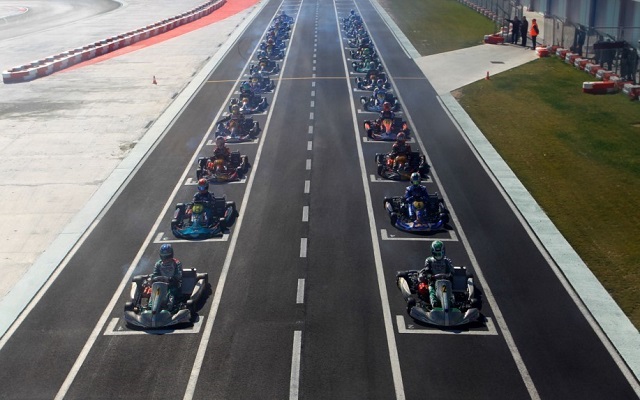 In the first of a series of regular updates from the world of karting, Gruz David reviews the 2015 season so far in the senior KF category

In recent decades, professional racing drivers starting their careers in karting has become so common that only a handful of single-seaters racers can be found as exceptions. Drivers who score numerous wins and titles throughout their karting career often end up as great car racers, so scouting for talent is extended to karting championships, even among F1 teams.

In an attempt to follow prospective single-seater stars at even earlier stages of their career than before, PaddockScout will be reviewing the major karting championships and those who play major roles in them. Before we analyse the recently-ended CIK-FIA European Championship, we look back at the first half of the season, which consisted of five KF and seven KFJ events.

Although KF is considered as the senior class for the direct-drive karts, previous years proved it is a category single-seater racing followers should keep an eye on as a big number of junior stars contested and succeeded in KF championships. Most of the 2014 KF trophies were collected by youngsters about to step up to single-seaters such as world champion Lando Norris, European champion Callum Ilott and Alessio Lorandi. 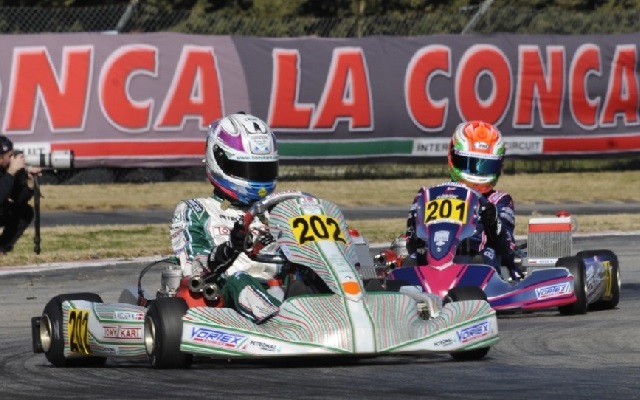 Nielsen and Basz fought for the title in every series they took part in over the spring (Photo: Press.net)

A new wave of talent joined for the current season to fill the void and these rookies have impressed with their pace from the get go but their lack of consistency allowed some more established participants to steal the glory.

Kicking off the season one step ahead was the Dane Nicklas Nielsen, one of few youngsters unable to graduate to cars over the off-season. Turning 18 this February but already racing at this level since 2012, he is a mixture of a potential future single-seater star?and an already experienced karter. Nielsen collected three titles over the spring, although it could have been even more if not for some bad luck.

The opening piece of the calendar was the WSK Champions Cup, a double-header taking place at La Conca in two consecutive weekends. The first round, held in January, already provided one of the craziest finals. It first looked like a calm one with an easy Nielsen win but weather interfered and?a massive shower hit the track, forcing the officials to bring out the red flag in order to change to wet tires.

For Nielsen, it all fell apart at the restart as the Dane?s kart could not be fired up in time, which saw him being relegated to the back. This gave the young Dutchman Richard Verschoor the lead, and his victory would have been deserving enough just by staying ahead under rainy?conditions.

However, his race got even more complicated when Egor Stupenkov, who charged through the field on the wet track and got close enough to attack Verschoor on the final lap. A spectacular battle eventually ended with Verschoor winning on his KF debut in style.

There was no mercy from Nielsen in the second round, where a confident pre-final and a less commanding but still lights-to-flag final victory eventually earned him the title. Nielsen was given a run for his money by the experienced Karol Basz and fellow Dane Casper Roes, the race’s top rookie, which gave them third and fourth respectively in the standings behind runner-up Verschoor. 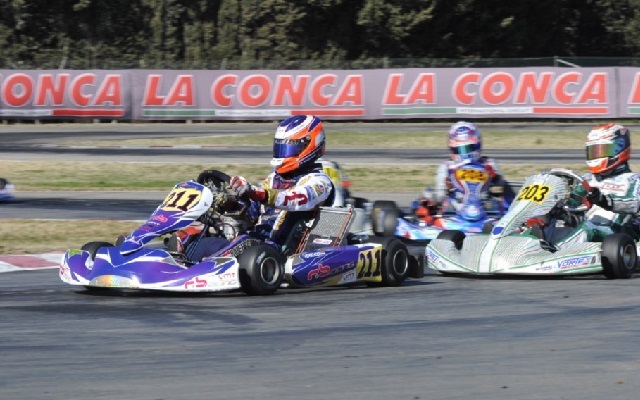 Verschoor kicked off with a victory but failed to step on the podium ever since (Photo: Press.net)

Two weeks later, the field was back to racing at Lonato to contest the prestigious Winter Cup. Nielsen looked untouchable before being beaten by karting veteran Mark Litchfield to the pole position. The Dane fought back in the final though and took his second title of the season ahead of his Tony Kart teammate, the 14-year-old Kiwi Marcus Armstrong and 2012 world champion Felice Tiene.

Another one-off was the newly-established Gold Cup where Nielsen was able to claim first on the final?s grid without much trouble. For the first time however, the 18-year-old Dane had to settle for something less than a victory. The race immediately turned into a duel between Nielsen and Basz, the duo confidently ahead of the rest. Basz, for the second time in three events, was right behind Nielsen but the 23-year-old was not content with a second place this time around and a successful move earned him his third senior KF title in nine years. An impressive rookie from last year but not moving up to cars, Martijn van Leeuwen grabbed the final podium spot, recovering from a relatively slow start to the season. 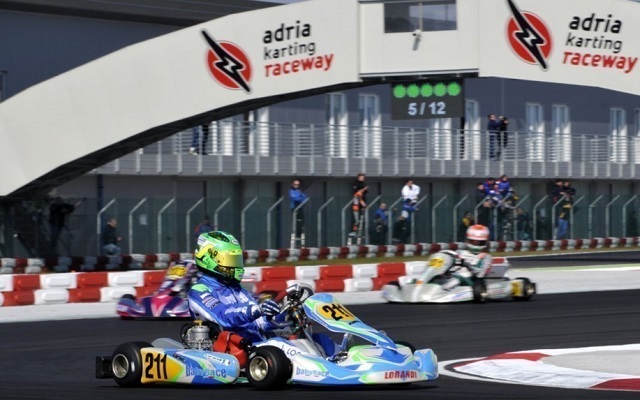 Lorandi followed his brother’s footsteps into the category (Photo: Press.net)

That was followed by the opening round of the main WSK championship, the Super Masters, which consisted of four rounds, making it the longest series in 2015. Round one took place at the same track as the Gold Cup, and resulted in the same podium. Basz led every lap of the race while Nielsen, suffering from a bad start, could do nothing more than to recover in second, close ahead of Van Leeuwen.

Nielsen was set to fight back two weeks later at Castelletto but, again, he found himself behind Basz at the checkered flag. This time he could only finish third as karting veteran Matteo Vigano had a standout race with second. Armstrong and Leonardo Lorandi, younger brother of Alessio, were fighting it out for fourth to be the top rookie of the final. Armstrong eventually hit the Italian on the final turn of the race ? just one example of incidents in which youngsters threw away strong results. As such, the Belgian KF rookie Ben Lessennes finished fourth.

At halfway point of the Super Masters, another one-round event – the esteemed Trofeo Andrea Margutti – was held. With the absence of Nielsen and Basz, the others were given a chance to leave with a championship title for the first time this year. Alexander Vartanyan, who showed great pace on one lap many times previously, was confidently first throughout the whole weekend to clinch the title. Lorandi and Max Fewtrell, possibly the biggest KFJ stars moving to KF, finally grabbed their first, long-awaited podiums, following a retirement from Verschoor. 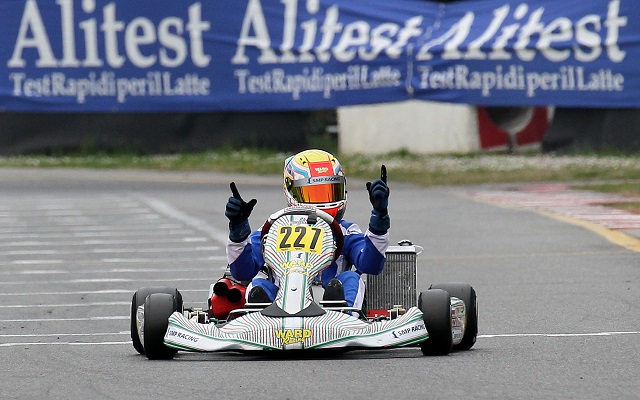 The success had a boosting effect on Vartanyan as he was finally able to convert his great qualifying pace into race results in the Super Masters, and the SMP protege started the championship?s third final from the front row. He was running behind pole-sitter and initial race leader Nielsen but the Dane suffered a retirement due to technical issues, giving the Russian his second consecutive victory. Lorandi also repeated his TAM performance by taking second, followed by Tiene. Winner of the first two rounds, Basz finished only sixth, taking the title fight to the season finale with Nielsen and Vartanyan retaining a realistic chance to snatch the crown

Things did not go as planned for the Pole in round four either. A late incident in the pre-final relegated him to 12th on the main race?s grid and although he impressively recovered to fourth, a 10-second time penalty for a bad manouevre put him out of contention. Nielsen was unable to beat Tiene over the weekend but still collected enough points to take the lead in the standings and win the second major championship of the season. Tiene jumped into third after dominating the round, just ahead of Vartanyan, who ended the series with another podium in third.