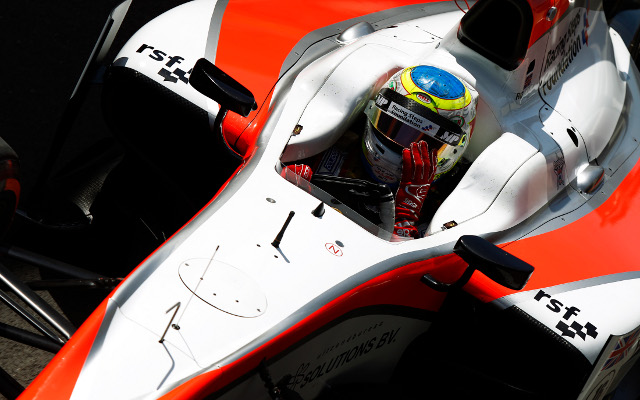 Oliver Rowland will return to the MP Motorsport GP2 team for next weekend?s races at Spa-Francorchamps.

The Formula Renault 3.5 points leader made his GP2 debut with the Dutch squad at Silverstone and impressed, given he had never previously driven the car

He finished 10th in the feature race (after a penalty for abusing track limits robbed him of eighth), and took seventh in the sprint after a notable pass on championship leader Stoffel Vandoorne.

The Racing Steps Foundation-backed Briton did not stay in the car for the following round in Hungary, with fellow FR3.5 racer Nicholas Latifi taking his place.

In racing at Spa, Rowland will return to a track at which he won in FR3.5 in May this year.

“It’s another great opportunity for me to show what I can do,” said Rowland.

“I’ve driven the car now, and I’ve raced at Spa already this year, so I reckon I’m probably on par with everyone this time around.

“Podium finishes are the target. If I can achieve that it would be a great way to show my appreciation to the RSF and MP Motorsport for making this possible.”

MP team boss Sander Dorsman commented: “Oliver’s a top driver and we’re glad to have him back with us.

“He scored points in both races at Silverstone so there’s no reason why he can’t take a big step forwards at Spa.

Whatever happens at Spa, Rowland will be unavailable to take part in the Monza round a fortnight later as it clashes with the next FR3.5 round at Silverstone.