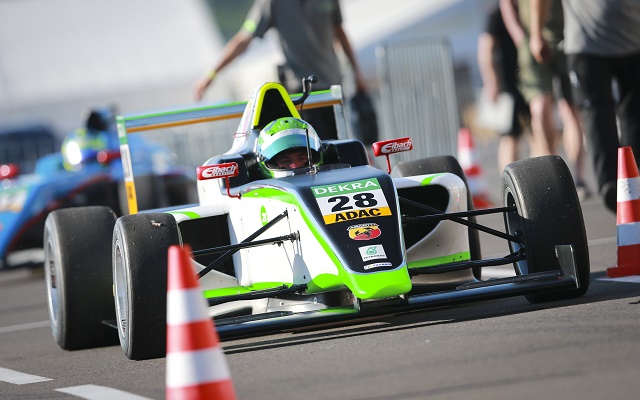 Dutch racer Janneau Esmeijer, who started the first ever ADAC F4 race from pole, is back to the head of the grid after topping qualifying at the Nurburgring.

Esmeijer starred in Group B, while his HTP teammate Marvin Dienst held on to the top spot in Group A to make up the front row.

Dienst prevailed in what was a close fight between himself and Mucke teammates Lando Norris and Robert Shwartzman, the trio way ahead of the rest of the group.

Both Norris and Shwartzman came within a tenth of Dienst, but couldn’t dethrone the HTP driver.

Jenzer’s Marek Bockmann was best of the rest in fourth, ahead of Mike David Ortmann, Harrison Newey and Nikolaj Rogivue – both Bockmann and Rogivue recording their personal best qualifying results in ADAC F4 in the process.

The fight for the Group B honours, meanwhile, did not seem confined to just a few names as there were several changes out front throughout.

Yet, eventually, Esmeijer moved to the top and then found extra pace to secure a surprisingly comfortable double pole.

David Beckmann was closest to challenging the Dutchman and will share row two with teammate Norris, while Prema’s Ralf Aron will line up on row three.

Motopark rookies Jonathan Cecotto and Michael Waldherr made up the top ten.

The first six spots on the grid will remain unchanged in race two, with Schumacher taking seventh ahead of Bockmann, Eriksson and Ortmann.