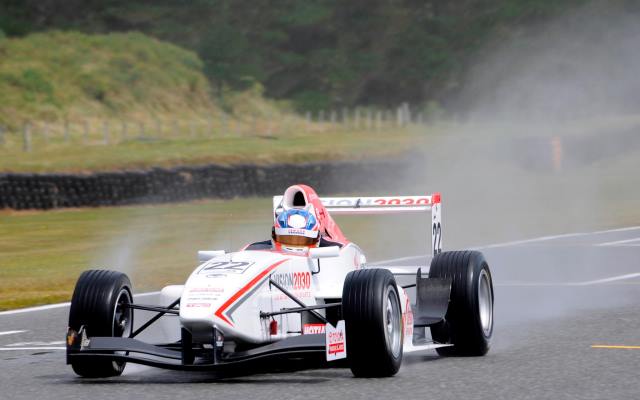 Andrew Tang secured a maiden Toyota Racing Series win for himself and the Neale Motorsport squad in a soaking second race at Teretonga.

Tang took the lead as reverse grid pole-sitter Matevos Isaakyan slipped backwards at the start. Race one winner Egor Orudzhev went from eighth to second on the opening lap, and then proceeded to take the lead away from Tang.

The Russian’s stint out front only lasted to lap four however, when he retired from the race.

The conditions meant that very few laps were completed under green flag, and when the race was completed under safety car it was Tang who crossed the line as the winner ahead of Jann Mardenborough and Martin Rump, who made good progress after starting seventh.

Steijn Schothorst was even more impressive, finishing fourth despite starting 18th as a result of his misfire-induced retirement from the lead of race one. He demoted Denis Korneev to fifth in a brief spell of racing before the final safety car period, while Jordan Oon following up his race one podium with sixth.

Orudzhev was joined on the sidelines by Robin Hansson and Macauley Jones.

Rump’s double podium puts him into the standings lead, ten points ahead of Tang with Mardenborough a further five back.