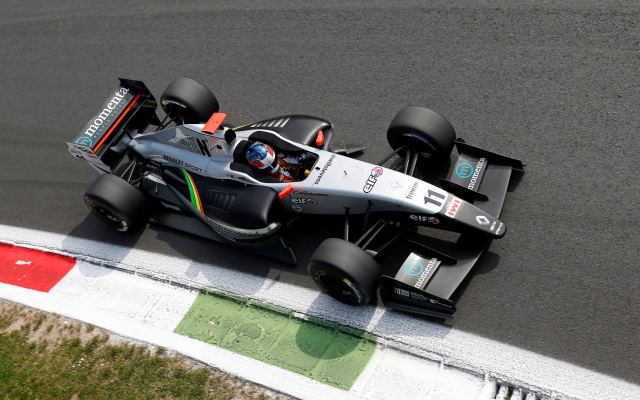 Will Stevens made a winning start to the 2014 Formula Renault 3.5 season with a comfortable maiden victory at Monza.

There was drama before the start when pole-sitter Carlos Sainz – dominant through the weekend up to that point – suffered an electrical problem that left him stranded on the grid as others began their formation laps.

That left Will Buller and debutant Luca Ghiotto at the front of the grid for the race start but both got poor getaways, while Stevens hooked up his Strakka Racing machine perfectly to pull into the lead.

Eurocup Formula Renault 2.0 champion Pierre Gasly ran deep at the first chicane and returned to the track in P2 behind Stevens, before giving up the place to Roberto Merhi.

The race was neutralised on lap two following a frightening aerial crash involving Marco Sorensen. The Dane was running side-by-side with Jazeman Jaafar as the pair crossed the line at the end of lap one and moved right towards the Malaysian’s car whilst following the line of the car ahead.

The resulting contact sent Sorensen’s Tech 1 car upside down, sliding along the pit wall for some distance before coming to a stop at the pit exit. Thankfully, Lotus F1 test driver Sorensen was quickly out of his car and seen standing and talking to medical staff shortly afterwards, while Jaafar also escaped unharmed.

After the safety car period, Stevens’ lead went untroubled and the Briton – who finished fourth in the 2013 standings – was able to claim his first win in the series with a margin of 6.8 seconds over Merhi.

The race was the 2011 European F3 champion’s first race back in a single-seater after two years in the DTM, and saw the Spaniard score the first podium finish for the Zeta Corse team – which underwent a change to Russian management over the winter.

Gasly fell behind Nikolay Martsenko at one stage but was able to regain the race to secure a podium on his debut both in FR3.5 and as a Red Bull Junior Team member.

Having fallen back as far as seventh under the safety car, Gasly’s Arden Caterham team-mate Buller was able to recover to take fourth with a last lap overtake on Martsenko. The sole Comtec driver’s fifth place matched his previous best FR3.5 result from his debut at Motorland Aragon two years ago.

There was frought racing outside of the top five for much of the race. Merhi’s rookie team-mate Roman Mavlanov – who never scored a point in three years in Eurocup Formula Renault 2.0 – moved up to fifth after the safety car, but after losing a place to Buller then slipped behind the trio of Oliver Rowland, Marlon Stockinger and Sergey Sirotkin.

The three drivers were all fighting back after qualifying disasters – Fortec drivers Rowland and Sirotkin started 16th and 18th after suffering a bizarre lack of speed while Stockinger was relegated from sixth to 13th for setting his time under a red flag. With Rowland successfully keeping Stockinger at bay to keep sixth, Sauber tester Sirotkin pulled off an aggressive overtake on the Filipino for seventh at the second chicane. However, the Russian made an error at Ascari soon afterwards, sending him off track and dropping him back to eighth again.

A couple more moments at the first chicane saw Mavlanov fall back to 14th in the end, allowing Zoel Amberg and Meindert van Buuren to claim the final two spots in the top ten after Matthieu Vaxiviere crashed at the Parabolica with two laps left.

Update: Stockinger has been relegated from seventh to 14th due to a 25-second penalty for overtaking under the safety car. Matias Laine inherits the final point with Sirotkin,Amberg and van Buuren promoted. Sorensen meanwhile has been given a five-place grid penalty for causing his incident.