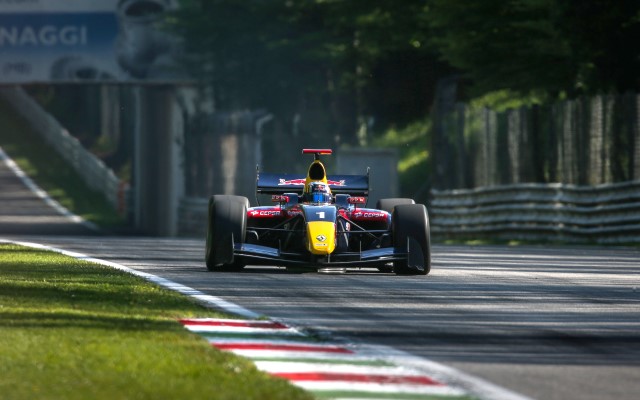 Carlos Sainz has claimed a commanding pole position for the second Formula Renault 3.5 race at Monza, bouncing back from the disappointment of being left on the grid in Saturday’s race.

The Sunday morning qualifying session was a closely-fought affair for the most part, with any number of drivers involved in the fight for top spot. But with two minutes remaining, Sainz went top with a time that was six tenths quicker than anyone else.

He then improved on his following lap to go a massive eight tenths quicker than anyone else.

Marlon Stockinger improved at the end to claim second place, but the Filipino was still 0.726s slower than DAMS driver Sainz.

Jazeman Jaafar edged out Will Buller for third, while Pietro Fantin went 0.001s quicker than Sergey Sirotkin to take fifth. With Fortec looking much stronger than they had on Saturday, Sirotkin led much of the session until Sainz took charge and the Russian then slipped to sixth.

Roberto Merhi was seventh after his second-place finish in race one, with Luca Ghiotto, Pierre Gasly and Matias Laine completing the top ten.

Laine’s Strakka team-mate Will Stevens has work to do to repeat his maiden victory from race one having ended up back in 14th, one spot ahead of Oliver Rowland, who fell from third to 15th – 1.5s slower than Sainz – in the final few minutes.