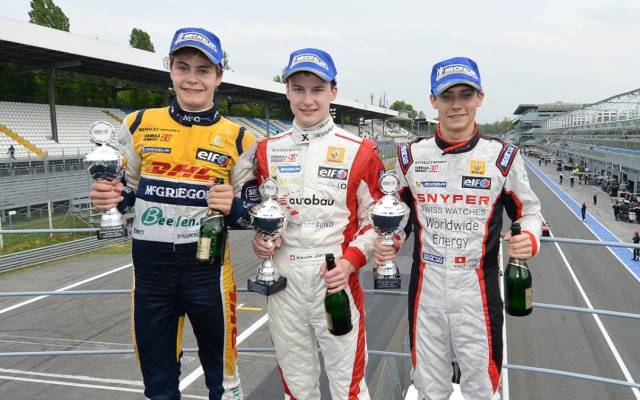 18-year-old Kevin Jorg took his career-first single-seater race victory in race two of the opening round of the 2014 Formula Renalt 2.0 NEC season at Monza.

Starting from pole, the Swiss driver managed to keep his lead and hold it to the checkered flag. Yesterday’s race winner, Louis Deletraz finished second to complete a Josef Kaufmann Racing top two, while Steijn Schothorst took the final spot of the podium.

The start of the race was chaotic and featured three different incidents causing Ukyo Sasahara, Gustav Malja and Aurelien Panis to retire and several other drivers to sustain car damage.

Ben Barnicoat, on the other hand, benefited from it and made his way up to fourth where he finished the race, closely followed by Andrea Pizzitola.

Enstone stable-mates Callan O’Keeffe damaged his front wing trying to pass Ramsay and Alex Albon had to visit the pits from fifth in the late stages of the race after taking a heavy hit from Sasahara on lap one.

The top ten was completed by Josef Zaruba from the Czech Republic, recording the best result of his single-seater career.

With the first round concluded at Monza, Deletraz leads the standings with 54 points, followed by teammate Jorg, Schothorst, Pizzitola and Barnicoat.