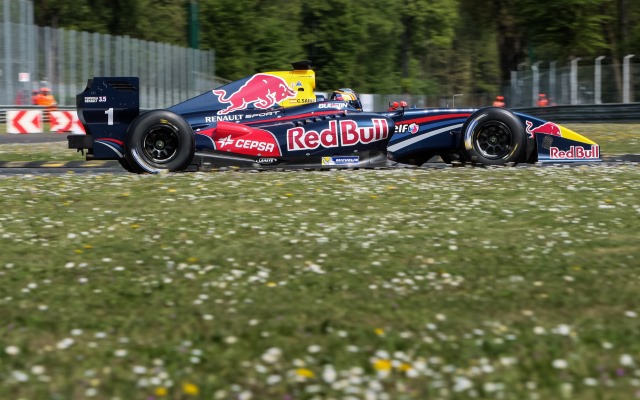 Carlos Sainz turned his dominant pace on the opening weekend of the Formula Renault 3.5 season at Monza into a comfortable win in Sunday’s race.

The DAMS driver had been unable to start from pole position in Saturday’s race due to an electrical problem but got a good start from P1 this time to retain the lead and gradually stretched his lead to ten seconds.

Marlon Stockinger was able to convert his second-place starting position into a second-place finish – his first podium in FR3.5. After going from sixth to third at the start, Sergey Sirotkin kept the Filipino in sight throughout the race but was never close enough to make move and settled for third.

Nikolay Martsenko delivered an aggressive drive, passing numerous drivers and taking sixth away from Jazeman Jaafar at the very end of the race. Pietro Fantin took eighth after a long but ultimately fruitless attempt to keep Martsenko at bay.

Race one runner-up Roberto Merhi was ninth with Oliver Rowland claiming the final point with a superb pass on Zoel Amberg around the outside of Ascari. The Briton recovered after stalling at the start of the formation lap and beginning the race from the pits.

Race one winner Will Stevens was forced to retire after contact with Will Buller at the first chicane that put the Strakka driver in the gravel and led to Buller retiring six laps later.

Sainz – who set the fastest lap in all six sessions during the weekend – is tied for the points lead after the first round with Stevens and Gasly.