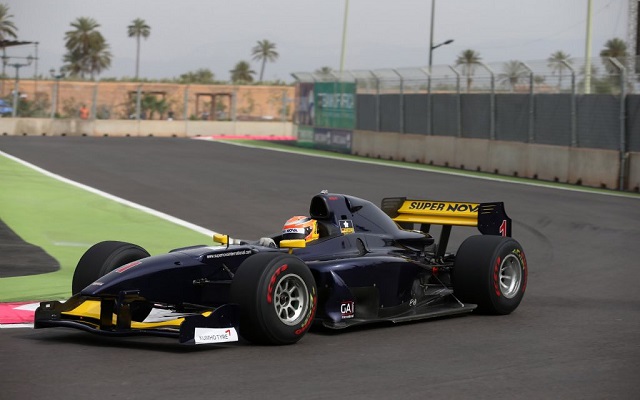 Auto GP debutant Markus Pommer took a career-first victory in the series’ opening round at Marrakech, confidently converting a reverse-grid pole into first at the checkered flag.

After getting off to a solid start, the Super Nova driver immediately began pulling away from the rest of the field and would prove untouchable on pure pace throughout the remainder of the race distance.

Pommer’s early advantage was in part due to the early fighting for P2, as Eurotech rookie Loris Spinelli got off to a great start and made a forceful move into turn one to depose front row starter Andrea Roda.

Taking over in second, Spinelli immediately came under pressure from Michele La Rosa and wound up parking the car in the barriers later on during the opening lap. As the cars went over the line at the end of lap one, Zele Racing’s Sergio Campana was also ruled out of contention, having to retire the car in the pits due to a faltering gearbox.

While La Rosa surrendered P2 to Sam Dejonghe shortly thereafter, the drivers began to make their mandatory stops, which shuffled up the order but had no effect on Pommer’s commandeering lead.

Kevin Giovesi and Richard Gonda were among the first drivers making their scheduled stop, but that would not prove beneficial to either, as the Slovakian ended up collecting the Eurotech man on the outlap, with both retiring on the spot.

Race one winner Kimiya Sato found himself in fifth after the series of stops and managed to overtake both Roda and La Rosa with relative ease, before getting stuck behind Dejonghe. The Belgian spent the remaining laps in defence mode, which resulted in a train being formed behind him.

With three laps to go, Sato made his way past Dejonghe, with the Belgian soon coming under pressure from Zele Racing’s Tamas Pal Kiss, who was putting in a fighting drive from the back of the field. The Hungarian racer managed to get a run on Dejonghe on the final lap and passed him on the straight to claim the final podium position.

So, it was Pommer who crossed the line in first, a whopping 23 seconds ahead of nearest rival Sato, with Kiss rounding out the top three.

Dejonghe looked set to take fourth, keeping teammate Roda at bay into the final hairpin, when an overoptimistic move from La Rosa ended up punting the Belgian into a spin and out of the race. In a dash to the finish line, it was Roda who picked up fourth, narrowly edging out Michela Cerruti in fifth and La Rosa in sixth.

Giuseppe Cipriani crossed the line in seventh, while Dejonghe got to be classified in eighth. Another last lap retirement – Francesco Dracone – took ninth.

In the standings, Sato leads the field with 40 points, with Pommer trailing him by 14 in P2.