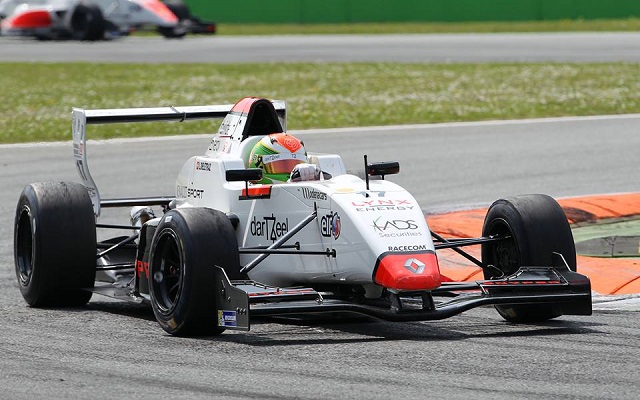 The 16-year-old Swiss driver led every lap of the race, despite being challenged by Ukyo Sasahara in the closing minutes until the checkered flag.

Deletraz made a good start from first on the grid, while, behind him, there was some opening lap mayhem, with incidents involving top ten starters Roy Geerts and Matthew Graham.

While the Swiss poleman pulled away, fellow front row starter Sasahara lost a position at the start to Andrea Pizzitola, but the Euronova man was able to reclaim it shortly thereafter.

The Japanese racer then went on to close the gap on Deletraz, which led to the leading duo being separated by less than a second at the checkered flag.

The podium was completed by Pizzitola, who saw off a challenge from Lewin Amweg, with the ART Junior Team driver eventually having settle for fourth. The top five was rounded out by Manor MP’s Steijn Schothorst.

Series debutant Stefan Riener ran in sixth before retiring from the race, allowing Alex Albon to slot into the position, who was closely followed by Kevin Jorg at the flag. Mark Burdett Motorsport’s Raoul Owens took eighth ahead of Racing Steps Foundation-backed Ben Barnicoat and Lotus junior member Gregor Ramsay, all of whom were less than 2.5s behind sixth-placed Albon.

The second race of the weekend will start tomorrow at 9:55 local time with Jorg and Deletraz sharing front row.