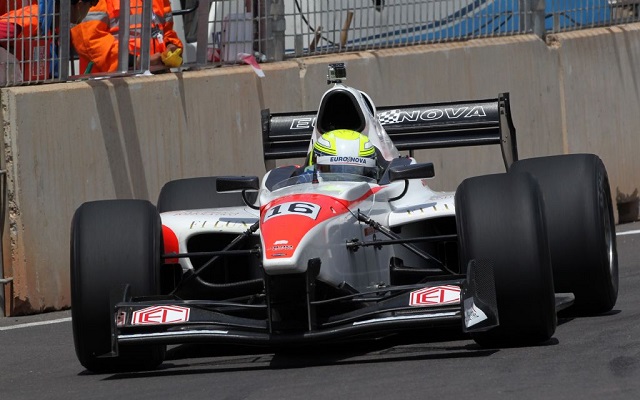 The 2013 runner-up took the checkered flag in a race of attrition, which saw only six out of the starting 13 drivers classified on the lead lap.

The start of the race was relatively calm, with Eurotech poleman Kevin Giovesi getting off the line nicely to hold on to the lead. Super Nova debutant Markus Pommer came to a near stall on the front row and ended up at the back of the field, while Tamas Pal Kiss overtook teammate Sergio Campana to inherit P2 into turn one.

Giovesi went on to manage his lead over the Zele pair until lap seven, when he got bogged down on exit from the final corner and briefly let Kiss through into P1. The Italian tried to immediately retake the lead in the first sector, but wound carrying too much speed into the turn, forcing both himself and his Hungarian rival into the barriers and ending their races.

The crash brought out the safety car with most drivers coming into the pits for their mandatory stops and, while Sato inherited the lead, frontrunner Campana briefly stalled exiting his box, which sent him down the order.

At the restart, the Japanese driver kept the lead from Andrea Roda, who came under pressure from a recovering Pommer. Further down the field, a promising debut from Richard Gonda was cut short due to a mechanical failure, while the next lap saw the retirement of Campana, who demolished his suspension against the wall.

While the top three stayed in relatively close proximity, the rest of the field was fighting it out for the other points-paying positions. with many drivers more than a minute behind the leaders, having not been allowed to catch up under safety car. One of such fights saw Francesco Dracone battle it out with Loris Spinelli, shortly before retiring due to a suspension failure.

Closing in on the end of the race, Pommer, who found himself stuck behind Roda, attempted to overtake the Italian and failed to make the final hairpin, spinning out and stalling his car. The Virtuosi driver, thus, was relatively secure in second, but would lose the car under braking on the final lap, parking it in the barriers.

As such, while Sato cruised to his sixth win in the series, it was gentleman racer Michele La Rosa who took second, completing a Euronova 1-2. Another middle-aged competitor Giuseppe Cipriani rounded out the top three – with both him and La Rosa picking up their first podiums in the series.

Michela Cerruti was fourth, ahead of series rookies Sam Dejonghe and Spinelli, who rounded out the lead-lap finishers.

Roda and Pommer, who rejoined the race after stalling in the hairpin, were classified a lap down, with the German taking provisional reverse-grid pole for tomorrow’s race.

Dracone and Campana completed the top ten, picking up the final points.