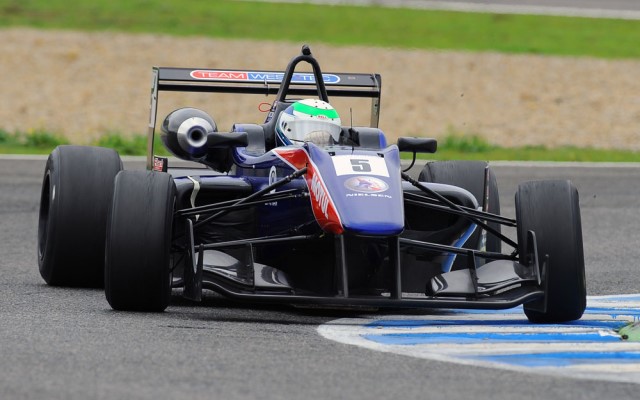 Stern ended the day four tenths quicker than Beitske Visser, who continued her great pace from Friday and topped another two sessions.

Team West-Tec’s Christopher Hoher ensured the unchanged order of the top three as the 16-year-old Austrian went third fastest overall. Karting graduate Alex Palou improved on the second day and became the leading Campos Racing driver of the day in fourth, while Tanart Sathienthirakul from Thailand completed the top five.

The day started with Visser going fastest in session one. She was narrowly quicker than West-Tec trio Hoher, Cameron Twynham and Sathienthirakul, while Palou completed the top five.

The second run of the day saw Stern easily taking the top spot as only Palou and Visser were able to stay within one second. Twynham and Japanese driver Yu Kanamaru rounded out the top five.

In the afternoon, session three was once again Visser’s time to shine. The Dutch driver was more than seven tenths of a second clear of the rest. Hoher was able to get second, closely followed by Stern, Sean Walkinshaw and Che One Lim.

Stern completed the fastest time of the two days testing on the last session as he was the only one who was able to go under the 1m36s mark. Hoher continued to impress with second again, while Visser, Palou and Sathienthirakul completed the top five.

With the first stage of the Winter Series complete, the championship will return for races at Paul Ricard on 1-2 March and at Barcelona two weeks later.