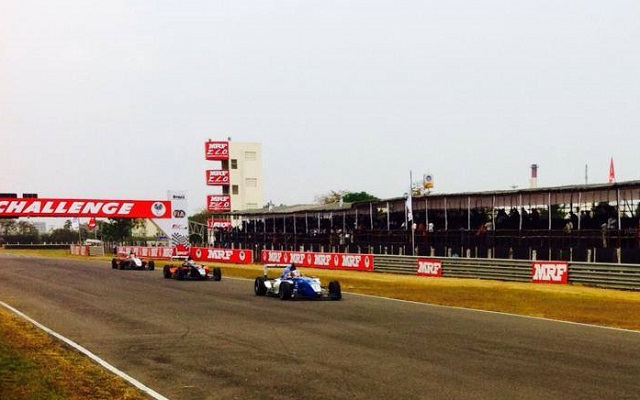 Two victories and a podium in three MRF Challenge races on Saturday allowed Brit Rupert Svendsen-Cook to seize the championship lead from GP3 race winner Tio Ellinas coming into the final day of the season at Madras.

Svendsen-Cook started the first race of the round on front row behind Ellinas and managed to defeat the Cypriot in a race-long fight for victory. Narain Karthikeyan, having started from third, fell behind Oscar King during the opening lap but managed to make his way back onto the podium as the race went on.

Ellinas’ title ambitions were struck a huge blow in race two when he retired after tangling with Bharath on lap nine. Up ahead, the race wound up contested between Svendsen-Cook, Tincknell and Sam Dejonghe.

The Belgian, who largely sat out the 2013 junior single-seater season, came out on top in the final laps, with Tincknell taking second and Svendsen-Cook settling for third. Cullen and Dylan Young made up the top five, ahead of Autosport’s Ben Anderson, Brabham, Max Marshall, Laura Tillett and Abdulla Al-Thawadi, who completed the points in a retirement-heavy race.

Anderson got reverse-grid pole for race three but was ruled out of contention right away with a drive through penalty for a false start. Meanwhile, Svendsen-Cook and Tincknell charged their way to the front and finished the race more than 30 seconds ahead of the rest of the pack, with the former taking the victory.

Australian racer Young started the race from front row and managed to keep a number of drivers behind to take his maiden podium in the series. King and Ellinas fought their way up to finish just one second off the podium, ahead of Cullen, Dejonghe and Myasava. Local racers Vikash Anand and Bharath completed the top ten.

Svendsen-Cook leads the standings with 185 points to Ellinas’ 176 coming into the final two races on Sunday.