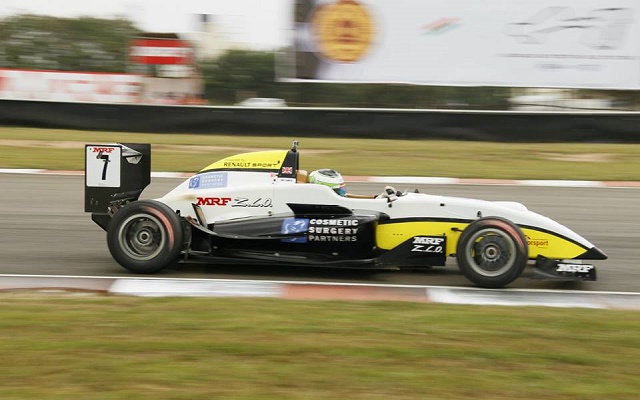 British driver Toby Sowery became the 2014-15 MRF Challenge champion with two races to spare after winning the first two races of the final round at Chennai.

The Briton was fourth on the grid for the first race, but was up into the lead after an incident befell the drivers ahead of him. Oscar King, who was third on the grid, hit championship contender Ryan Cullen on the rear, forcing the latter to hit polesitter Sebastian Balthasar.

The German retired on the spot, while Cullen and King were forced to pit, with the safety car being called out due to another incident which took out Freddie Hunt, Dylan Young and Laura Tillett.

Sowery led the race from thereon, but a light drizzle in the losing stages brought Tarun Reddy and Gustavo Myasava within striking distance. The 18-year-old F3 Cup champion was able to hold on, with Reddy and Myasava both finishing within a second of the leader.

The top six positions were reversed for race two, which meant that Papareli started on pole. The Brazilian, however, was slow off the line and lost his lead to Bharath.

Sowery meanwhile, stormed up to third from sixth, and that soon became second after Papareli retired from the race.

Bharath was pulling away initially, but he ran off the circuit on lap three, allowing Sowery to take the lead, which the Briton never relinquished. He also clinched the fastest lap, which gave him two extra points and put him out of reach of his rivals in the championship standings.

Myasava picked up a second straight podium finish in second, while King made amends for his mistake in race one by coming home third. Further behind, Reddy held off a train of cars to take fourth, ahead of Cullen, Bharath, Balthasar and Matthew Solomon. Keshav and Young rounded out the top ten.

While the title is decided, the fight for the runner-up spot will carry on through tomorrow, with Cullen and Bharath separated by just seven points.