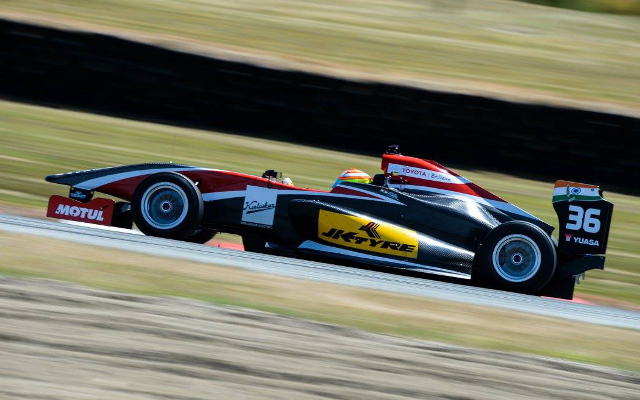 Promising Indian racer Arjun Maini took his first win of the 2015 Toyota Racing Series in the first race of the weekend at Teretonga, to close on the championship lead and keep up the M2 Competition team’s 100 per cent winning record from the first four races.

The race was red-flagged after pole-sitter Matteo Ferrer and fourth-place starter Santino Ferrucci both crashed out on the opening lap.

At the restart, Maini nicked the lead from his team-mate Brandon Maisano and quickly built an advantage out front.

The safety car was back on track though when Sam MacLeod suffered his second retirement of the campaign on lap four after running seventh.

Maini was able to keep Maisano at arm’s length over the remainder of the race, winning by a second.

Championship leader Lance Stroll – a double winner in the opening round last weekend at Ruapuna – made it a 1-2-3 finish for M2 with two late passes on Charlie Eastwood and then James Munro, posting the fastest lap and new track record in the process.

With fourth, home favourite Munro clinched his best result of the season so far after a disappointing opening weekend, and recovered well from ending qualifying upside down. Eastwood took his third top-five finish, ahead of the Victory Motor Racing duo of Stefan Riener and race three pole-man Brendon Leitch.

Alfonso Celis was unable to take part due to chassis damage sustained in his qualifying crash, and Giles team-mate John Simonyan also failed to make the start.

UPDATE: Post-race penalties to Maini and Maisano have handed Stroll the victory, with Munro and Riener completing the podium.