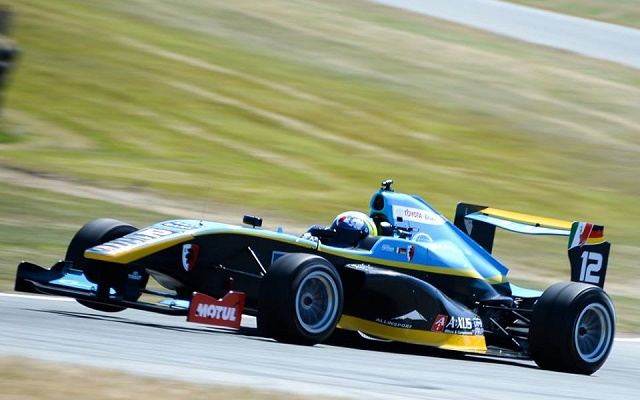 The pole positions for the second round of the 2015 Toyota Racing Series season at Teretonga went to Matteo Ferrer and Brendon Leitch, who sit 15th and 16th in the standings respectively.

Ferrer’s top time in the first session marked ETEC Motorsport’s first qualifying pole in the series since 2012. But Leitch secured an even bigger milestone for Victory Motor Racing, whose drivers had not taken pole in qualifying since the 2011 season.

Giles Motorsport’s Alfonso Celis took the early lead in the opening session, but was deposed by Leitch before the halfway point. Rushing to take the spot back, the Mexican went off into the tyre wall, suspending the session and ending his qualifying.

Friday pacesetter Santino Ferrucci managed to immediately go quickest after the restart. However, in the ensuing hectic fight for the top spots, it was Ferrer who prevailed, leading second-placed Brandon Maisano by 0.08s.

Just as on Friday, Ferrucci was again the first driver to go below 53s, doing so in the second session. However, at the ten-minute mark, Leitch stormed past him. Just then, Munro rolled, bringing out another red flag that would call an end to the session.

With Ferrucci settling for second, Stroll edged out MacLeod by 0.002s to claim third. Maini continued to figure out front with fifth, leading Riener and Eastwood.

Despite his off, Munro was classified in eighth, with Maisano and Thomas Randle completing the top ten.