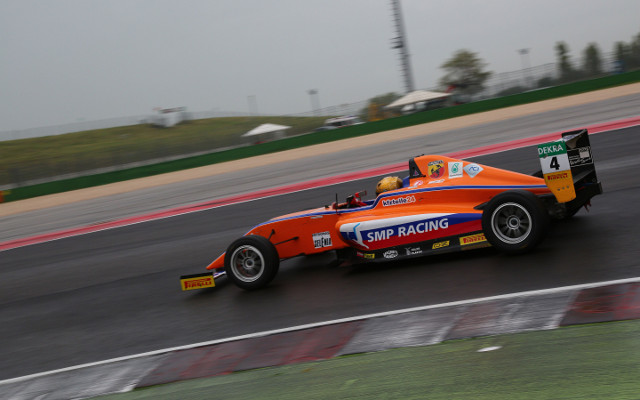 Robert Shwartzman outpaced new Italian F4 champion Ralf Aron to claim pole for the two main races at the final round at Misano, at the end of a wet day’s running.

Aron had led much of the first session, working his way down to a time of 1m48.872s, but he was beaten at the chequered flag by Shwartzman’s 1m48.729s.

Mucke Motorsport racer Shwartzman was the man to beat in the second session, being the only driver to go underneath the 1m48s mark in qualifying.

Prema’s Aron was second again, with his deficit to the Russian at 0.143s and 0.148s in the respective sessions.

Guan Yu Zhou sat behind Aron in a Prema one-two for much of the session but fell to fifth at the end.

With the championship gone, the Chinese Ferrari protege is trying to hold onto second place in the standings this weekend, but with closest rival David Beckmann away on ADAC F4 duty, Shwartzman must close a 50-point gap (double pole gives him five) to deny Zhou.

Sixth in the first session was Vincenzo Sospiri Racing debutant Simone Cunati ahead of Antonelli’s Joao Vieira and his own team-mate Maurizio Baiz. Raoul Guzman and Bar Baruch completed the top 10.

Bertonelli did take third in second qualifying ahead of Zhou with Siebert fifth and Vieira sixth.