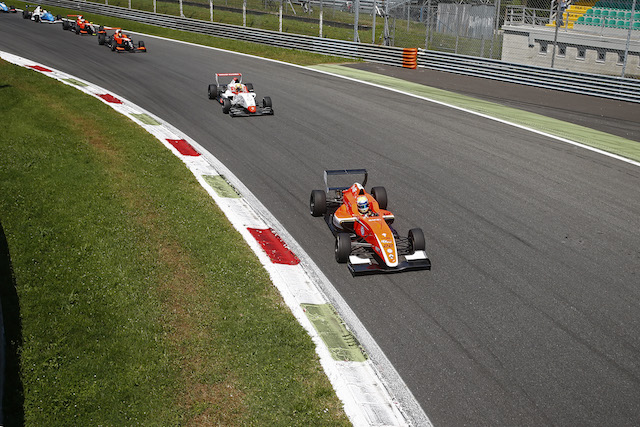 Harrison Scott made it three different winners from three races at the Eurocup Formula Renault round at Monza with his first victory in the category in the final encounter.

As in the previous two races, the lead changed hands at the start, with polesitter?Dorian Boccolacci?losing out to fellow front row starter?Scott, as well as?Lando Norris and?Hugo de Sadeleer, who went from sixth to second on the opening tour.

He would be repassed by Norris and Boccolacci prior to a safety car period required when?Nikitas Troitskiy and Mazepin collided on the pit straight.

Scott had a lead of almost two seconds at that stage, and?was able to resurrect that advantage immediately after the restart.

Norris managed to gradually cut the gap to his fellow Briton to under a second going onto the final lap, but Scott stayed clear to get a first Formula Renault win for himself and AVF.

Norris and Boccolacci completed the podium, the latter seeing off a challenge from?Robert Shwartzman after the restart.

Shwartzman would finish up sixth behind Max Defourny and?Gabriel Aubry, with de?Sadeleer falling?down the order after the restart when he ran deep at the second chicane.

Will Palmer took seventh from?Sacha Fenestraz near the end, and?Alexey Korneev made a last-lap move on?Henrique Chaves for ninth.