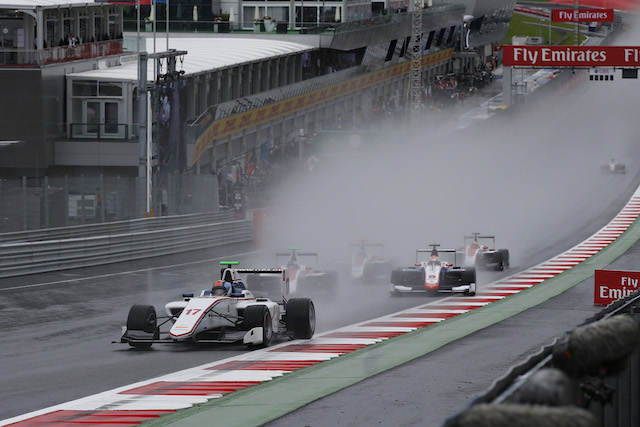 Ralph Boschung claimed his first?GP3 victory in a wet race two at Spielberg run mostly behind the safety car.

Originally fourth on the grid, the 18-year-old Swiss driver first gained a place when front row starter?Nirei Fukuzumi came to a halt on the first lap of a safety car start.

He then took the lead after?Matt Parry ran into fellow Briton?Jake Hughes?on the exit of Turn 1?when the pack was finally released after nine laps. With Hughes spun around and Parry delayed, Boschung able to pass his?Koiranen team-mate for the lead into Turn 2.

The safety car came back out soon afterwards to recover the stranded cars of Russians?Matevos Isaakyan and?Konstantin Tereshchenko, and there was more carnage at the restart when?Charles Leclerc – shuffled towards the back during the previous green flag action -?hit?Tatiana Calderon from behind on the run to Turn 2 and then helplessly collected another Arden car driven by?Jake Dennis.

The safety car returned to the track and remained on track until the final lap, with Boschung leading?Alex Albon, who went from sixth to second on?the initial lap of racing past?Antonio Fuoco and?Nyck de Vries, who completed the top four.

A second runner-up position of the weekend puts Albon only five points behind ART team-mate Leclerc in the standings, and the Monegasque driver’s chances of taking a third?Saturday win from as many events at Silverstone now look slim after he was handed a five-place grid penalty for “not driving in accordance to the wet conditions” when he collided with Calderon.

Jack Aiken?took fifth ahead of his former Formula Renault team-mates and rivals Hughes and Parry, with?Sandy Stuvik the final scorer in eighth.