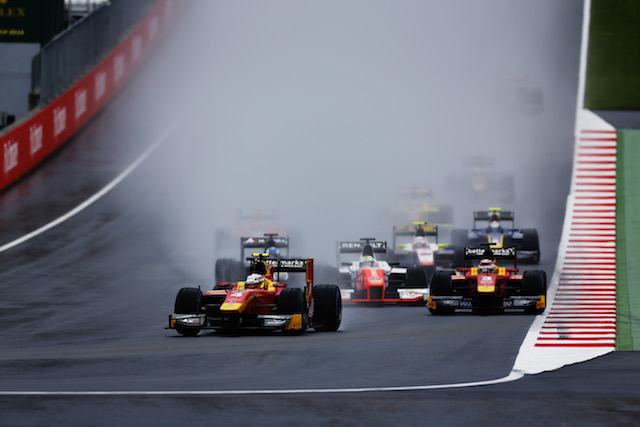 Jordan King claimed his maiden GP2 victory in the Spielberg sprint race after leading throughout in wet conditions.

Originally 10th in the feature race but promoted to eighth and reverse-grid pole by penalties for Sergey Sirotkin and?Gustav Malja due to?safety car?infringements, ?King led behind the safety car for three laps before the field was released.

He then appeared tentative in the early racing laps, but so was his ?Racing Engineering team-mate?Norman Nato. King then found his confidence and was able to pull away as Nato tried in vain to keep other cars behind, with?Oliver Rowland able to squeeze down the inside of Turn 3 and?Raffaele Marciello sweeping around the outside of Turn 6.

Rowland was unable to chase King, who?had a margin of around four seconds with six laps to go when a safety car was triggered by?Nicholas Latifi spinning in the Turn 1 run-off.

He didn’t let this bother him though, and was able to built a six-second advantage again in the final green-flag laps.

Rowland took second and was joined on an all-British podium by?Alex Lynn.

The DAMS driver started 11th and lost ground to an off early on but then went on a charge, quickly dispatching a group of cars that featured Nato, Latifi,?Mitch Evans, Sirotkin and?Pierre Gasly?to move up to fifth.

He then caught and passed?Luca Ghiotto?for fourth, but the top three were out of reach until the safety car caused by his team-mate Latifi’s spin.

At the restart he could pass Marciello, but was unable to do anything about his compatriots in front.

Behind the three Brits, the championship’s three Italians were due to be next?before Ghiotto spun from sixth to ninth at the very final corner.

Fourth for Marciello extends the points lead he claimed in the feature race, while?Antonio Giovinazzi lost time to a trip through the Turn 5 gravel trap early on but went on a charge after the restart, getting ahead of?Sirotkin, team-mate?Pierre Gasly and feature race winner Evans, who completed the points positions after Ghiotto’s slip-up.

The safety car prompted those outside of the leading group to gamble on slicks, headed by the points leader coming into the weekend Artem Markelov after he spun at Turn 3.

With a dry line forming the slick tyres were as much as five seconds quicker by the end of the race, but Markelov finished almost a minute down in 11th place, one spot ahead of Nato who joined him in pitting for slicks.