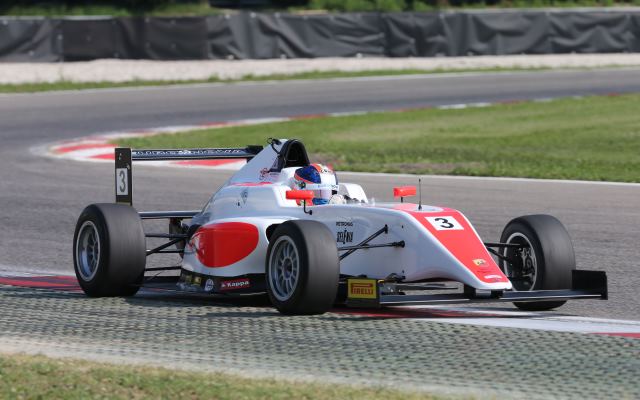 The Japanese driver held off the advances of Lance Stroll and Andrea Russo to cross the line with the three podium finishers separated by just 0.452 seconds.

The start of the race was chaotic, with reverse-grid poleman Ivan Matveev stalling on the grid and being collected by the Antonelli Motorsport car of Matteo Cairoli, with both drivers eliminated on the spot.

DAV driver Gustavo Bandeira, who started alongside Matveev on the front row, was another staller and the Brazilian was hit by Alain Valente, the latter having to dive into the pits minus a front wing. Further back, Mattia Drudi was the third staller at the start, but the drivers behind were able to avoid him.

The crashes brought out the safety car. Sasahara, who had started the race in sixth, led the way behind the safety car ahead of his Euronova teammate Leonardo Pulcini and a fast-starting Stroll in third, with Russo fourth and Stroll’s Prema teammate Brandon Maisano in fifth.

At the restart, Sasahara was able to get away from the chasing pack, while Pulcini lost out to Stroll at the end of the lap. The Canadian subsequently began to quickly close in on the race leader. Pulcini outbraked himself at turn one, losing third to the charging Russo. Further behind, Takashi Kasai managed to pass Max Defourny for sixth.

Stroll managed to close up to Sashara’s tail on lap nine, but the Japanese driver held him off. The battle for lead allowed Russo and Pulcini to close in on the pair, making it a tense four-way fight for the lead, but Sasahara held on to take the win ahead of Ferrari junior Stroll and Russo.

Pulcini finished fourth, ahead of Prema drivers Maisano and Kasai. Defourny held on to seventh from Jenzer’s Lucas Mauron, with Joao Vieira and Bar Baruch completing the top ten.