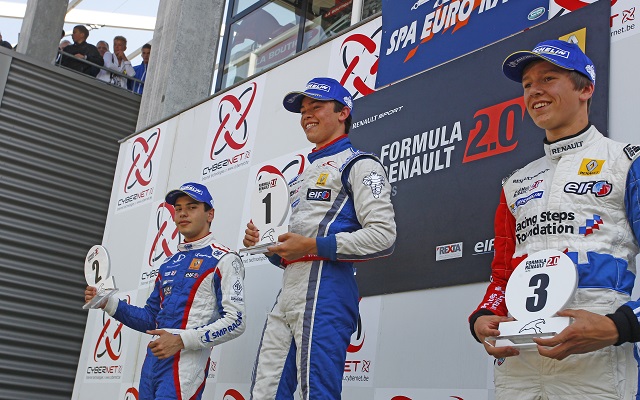 Dutchman Nyck de Vries continued to build up his lead in the championship standings with yet another victory from pole position at Spa-Francorchamps.

De Vries managed a great start off the line and was more than two seconds clear of his nearest rival after the opening lap. The Koiranen racer then continued to methodically build up his advantage on the damp track and crossed the line a whopping 12 seconds ahead of the opposition.

Fellow front row starter Matevos Isaakyan bogged down at the start and, as a result, got passed by Ben Barnicoat over the first lap, only to get back past the NEC regular the next time around. The Russian then immediately pulled clear of Barnicoat and cruised to another second-place finish, picking up his fourth consecutive podium in the series.

Barnicoat himself came under pressure from teammate Seb Morris, but the Welshman would drop out of the race in the final minutes.

It was then Charles Leclerc‘s turn to challenge Barnicoat but, despite a close last lap battle, the Racing Steps Foundation driver prevailed, securing his first podium in the series, while the Monegasque driver secured solid points in fourth.

Raoul Owens drove a solid, cautious race to take fifth, while Dario Capitanio fought his way up to sixth, helped out by a mid-race collision between Simon Gachet and Luke Chudleigh.

The Italian was just barely ahead of George Russell, Alessio Rovera and Alex Bosak, while Tech 1’s Akash Nandy narrowly beat teammate Patric Armand to round out the top ten.

* – retired on the formation lap