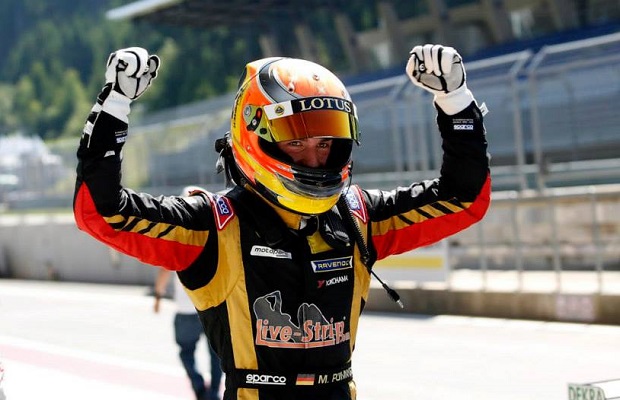 Markus Pommer led another Motopark 1-2-3 in the final race of the German Formula Three Spielberg weekend.

The German racer started from pole position and controlled the 21-lap race, extending his lead in the championship standings.

Pommer was most vulnerable during the opening laps of the race when VAR’s Sam MacLeod, who started alongside him on front row, enjoyed a similarly solid getaway and proceeded to shadow the German over the opening stint.

At one point early on in the race, MacLeod attempted an overtaking move, storming down the inside of a sharp turn, but ended up outbraking himself, allowing Pommer back through.

That incident would prove to be the closest anyone would get to robbing Pommer of his win, as the Lotus driver shortly began to pull away from the rest of the field.

MacLeod’s teammate Weiron Tan enjoyed a solid start to keep third over the opening lap but soon found himself unable to keep pace with the Motopark cars – first overtaken by Nabil Jeffri and then by Indy Dontje.

Jeffri then proceeded to put pressure on MacLeod, allowing Pommer to extend his lead with every passing lap.

A few laps afterwards, Jeffri finally got the opportunity to steal second. The Malaysian went side by side with MacLeod into the Remus corner and, while the Scot had the inside line, he was forced to brake late and overshot the turn, allowing Jeffri to sneak through.

MacLeod spent the remainder of the race defending from Dontje and, while the Dutchman never managed to pass him on track, the VAR racer picked up a drive through for multiple track limit infringements on the penultimate lap.

Up ahead, Pommer crossed the line 5.6 seconds clear of Jeffri to secure his sixth win of the season. MacLeod finished third on the road, but his unserved drive-through translated into a post-race time penalty, which demoted him to seventh and allowed Dontje to step on the podium.

Tan inherited fourth, ahead of Nicolai Sylvest and Andres Mendez, who fended off Nikita Zlobin before the latter received a track limits penalty.

Maximilian Hackl held off Zlobin to take ninth, while Luca Iannacone rounded out the finishers.

Santino Ferrucci was forced to miss the race due to an engine problem.