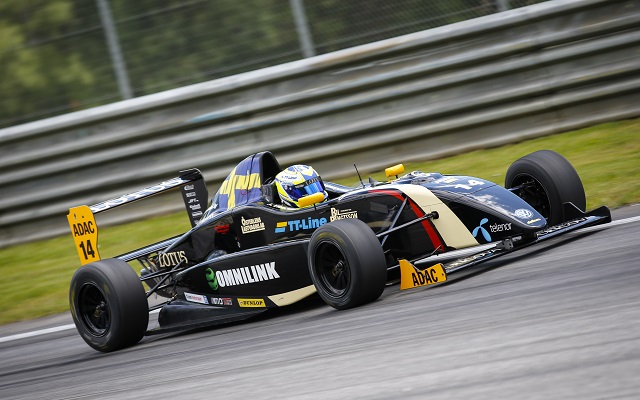 A frantic reverse-grid race three of the fourth ADAC Formel Masters round at Spielberg gave way to Joel Eriksson‘s maiden victory in the series.

The youngster produced a spectacular drive from the front row of the grid and withstood the pressure to claim the race win after 14 laps.

Reverse-grid poleman Nico Menzel appeared to have things under control during the start, holding the lead into the Castrol Edge corner, but was then swarmed by multiple cars over the next few turns.

With the chaotic battle unfolding out front, it was the lower end of the field which caused a safety car intermission. Luis-Enrique Breuer ended up spinning on exit of Schlossgold and tagged Philip Hamprecht‘s car, causing the latter to flip over in the grass. The stoppage didn’t last long as Breuer continued on the road while Hamprecht was quickly extracted from his upside-down machine, seemingly unhurt.

The safety car also provided the viewers with a stabilized racing order which saw Kim-Luis Schramm in the lead from Eriksson and Menzel. Schramm led at the subsequent restart but immediately came under pressure from Eriksson, who then attempted a dive into Schlossgold and emerged in the lead of the race.

As the Swede began to pull away, there was a multi-car battle for second place, involving Schramm, Menzel, Fabian Schiller, Ralph Boschung, Mikkel Jensen and Maximilian Gunther. With Schramm creating a bit of a train behind him, Jensen attempted a late move on him but the two ended up making contact. Schramm was forced wide and lost multiple positions but, surprisingly, neither of the drivers retired from the race.

The move yielded Jensen a warning and the Dane was now in P2, expected to set out after Eriksson. However, the Swede’s teammate Boschung proved to be extremely helpful as he forced Jensen to defend for multiple laps and allowed Eriksson to stretch his lead.

Yet in the closing minutes, both Jensen and Boschung began to noticeably close in on the lead and, with one lap to go, the gap that was once at three seconds was now at just one. Still, that proved enough for the young Swede, who carefully went around the Austrian track to take the checkered flag and claim his first win in cars.

Having overtaken Schramm relatively early on, Gunther brought the car home in fourth, despite visible nose cone damage picked up early on. Neuhauser’s Tim Zimmermann also managed to steal a place from the former race leader with a bold move in the second half of the race.

A brilliant overtake on both Schiller cars into Schlossgold allowed Marvin Dienst to recover points in seventh, ahead of Schiller, Igor Walilko and Dennis Marschall.