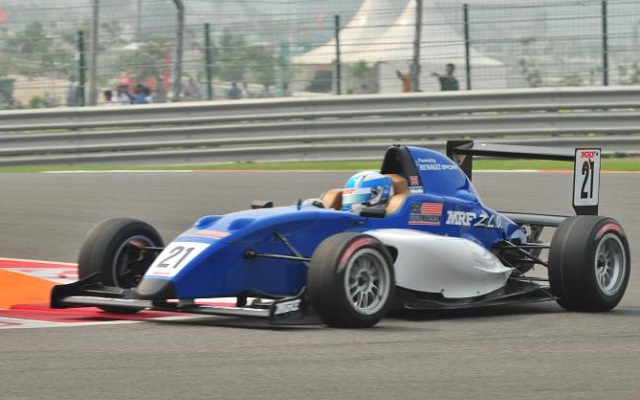 MRF Challenge frontrunner Rupert Svendsen-Cook became the first man on the grid to win multiple races in the current season of the championship, scoring a surprise victory in race one at Sakhir.

Starting on the second row, Svendsen-Cook managed a stellar opening lap that allowed him to comfortably lead ahead of front row starters Tio Ellinas and Arthur Pic early on.

An incident involving Sam Dejonghe then saw the safety car come out on lap two and, after the restart, Pic overtook Ellinas for second place, their battle allowing the Brit to maintain the lead.

A couple of laps later, Pic closed in on Svendsen-Cook, with Ellinas remaining close behind, but they found themselves unable to make a move. As such, the trio ran in formation for the rest of the race distance.

Harry Tincknell was five seconds down in fourth, while Renan Guerra finished fifth after a great first lap from tenth on the grid. Shinya Michimi fought his way up to sixth after early troubles, with his compatriot Yudai Jinkawa taking seventh.

UPDATE: Renan Guerra received thirty seconds of additional time as a post-race penalty, which promoted Dylan Young into the points and demoted Guerra himself to 15th.