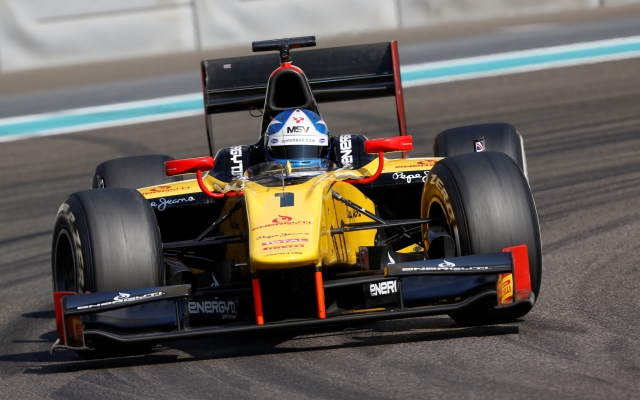 Jolyon Palmer has switched to DAMS for his assault on the GP2 Series title in 2014, joining Stephane Richelmi at the French team.

Palmer finished seventh in his third year of GP2 in 2013 after a strong second half of the season with Carlin, claiming feature race wins in Hungary and Singapore and a second place in Abu Dhabi.

“I only have one objective for next year, which is to win the GP2 title, and I believe joining DAMS will give me the best opportunity to achieve that,” said Palmer, who tested for both DAMS and Racing Engineering in Abu Dhabi earlier this month.

“They have a great track record of leading drivers to F1 and I will be working extremely hard to follow Romain Grosjean and Davide Valsecchi and become DAMS’ third GP2 champion in four years, and maximise my chances of securing an F1 drive for 2015.”

Richelmi finished one place behind Palmer in the standings after a consistent campaign, with highlights of a second place at Silverstone and pole position at the Nurburgring, and will now remain with DAMS for a second season.

?I?m really delighted to be continuing with DAMS in 2014,” said the Monegasque driver, who will be entering his third full year in the category.

“I?d like to thank [team boss] Jean-Paul Driot and the whole team for their trust in me. My aim will be to build on my experience this year and reach a new level. I feel very good in the DAMS family and all the conditions are in place for us to fight for the podium and victory next year.”

After winning the drivers’ titles in 2011 and 2012, DAMS finished fourth in the teams’ standings with just win, taken at the Nurburgring by Marcus Ericsson. The Swede is currently eyeing an F1 opening with Caterham.

“Our 2013 season was less fruitful than the two previous ones, but DAMS is still a top team and our hunger for victories and titles is greater than ever,” said Driot. “With this in mind I?m delighted to welcome Jolyon with whom we?ve been in contact for a long time and who had a great second half in the 2013 season.

“I?m also very pleased to keep Stephane with us, and I?m convinced that all the work we did with him this year will pay off in 2014. The experience and the evenly-matched capacities of these two drivers will enable us to fight at the front in the 2014 championship.”

McLaren protege Stoffel Vandoorne topped the final day of testing in Abu Dhabi while driving for DAMS. He had spent the earlier two days with ART Grand Prix and is known to be looking to race in GP2 next year.