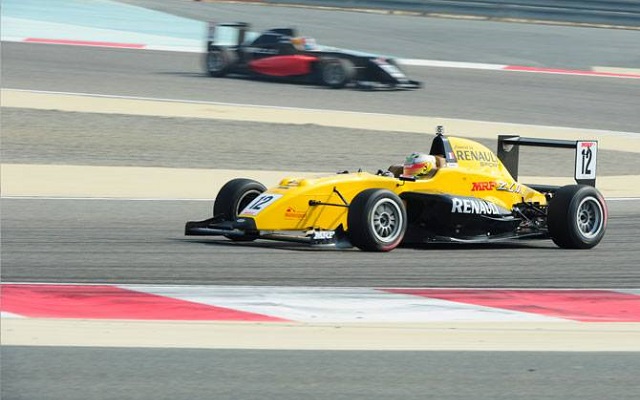 French MRF Challenge frontrunner Arthur Pic became the second double winner of the current series, picking up the victory in race two of the Sakhir round.

Lining up in fifth on the grid, Pic made it up to second by the first lap and then took the lead from reverse-grid poleman Yudai Jinkawa, who then tumbled way down the order over lap two.

FIA F3 race winner Harry Tincknell took over in second shortly, but couldn’t withstand the pressure from Tio Ellinas, giving up the place on lap six. The Cypriot then proceeded to chase after Pic, but, despite a pace advantage, ran out of laps before he could mount a serious challenge.

As such, it was Pic’s victory, ahead of Ellinas and Tincknell, who bagged his first podium in the series. Race one winner Rupert Svensen-Cook couldn’t manage to get past Shinya Michimi and ended up fifth, right behind the Japanese driver.

Sam Dejonghe secured sixth with an overtake on Sheikh bin Rashid Al Khalifa, who settled for seventh. Sam Brabham took the final point in eighth, while Dylan Young and Renan Guerra rounded out the top ten.