The British summer creates another eventful weekend of F1 feeder series action. That and much more in this week’s roundup…

For the second race weekend in a row, Esteban Gutierrez inherited the feature race win as a safety car ruined the leader’s race. After taking a fine pole in the wet on Friday, Fabio Leimer was driving perfectly in more, difficult conditions until Gutierrez’s teammate James Calado stopped on track. Just like Calado in Valencia, Leimer was left as the only frontrunner not to have stopped, meaning Gutierrez inherited the lead. The Mexican was running fourth early on but had stopped earlier to jump ahead of Johnny Cecotto and Jolyon Palmer who completed the podium.

Nigel Melker impressed on his way to fourth, ahead of Luiz Razia. DAMS duo Felipe Nasr and Davide Valsecchi started at the back after being excluded from qualifying for running out of fuel, but made their mandatory pitstops just before the safety car came in after it had led the field around for the first laps. They finished sixth and seventh.

Giedo van der Garde started the sprint race from reverse grid pole, but Razia took the lead away on lap two. Nasr followed him into second and attempted to get ahead of his fellow Brazilian, but later fell back behind Valsecchi as Razia drove away to win. Gutierrez finished fourth after a collision with Cecotto at the end of the last lap, for which he escaped with a grid penalty. Palmer and Melker were fifth and sixth.

Razia was one point behind Valsecchi coming into the weekend but is now six points ahead, with a further 37 back to third-placed Gutierrez.

Title rivals Mitch Evans and Aaro Vainio lined up on the front row for Race 1, but it was Antonio Felix Da Costa who had a storming start to take the lead at Village and drive away to a commanding win while Evans and Vainio took second and third. Daniel Abt was fifth, ahead of Conor Daly and Tio Ellinas who both impressed with drives up the order.

Alex Brundle and Kevin Ceccon completed the points and lined up on the front row for Race 2, with Brundle one of three to gamble on slicks. He and Daly went backwards on a track that was too wet to begin with, while Ellinas took the lead. Patric Niederhauser was rapid, coming from tenth to pass Ellinas for the lead and looked set to add to his Valencia win.

But the track came to those on slicks, and William Buller stormed to victory after starting last. Daly took second, while Niederhauser held on to third. Ellinas switched to slicks and was fourth, ahead of Robert Visoiu, who matched his teammate Niederhauser’s pace on the wets. Felix Da Costa was sixth.

Evans and Vainio fell out of the points, with the latter ending in the gravel after mounting fellow Finn Matias Laine. That means Evans leads the points by 11 over Vainio, who will have a grid penalty for Hockenheim. Felix Da Costa is up to third, but has work to do after a poor start to the season and is 42 points adrift. 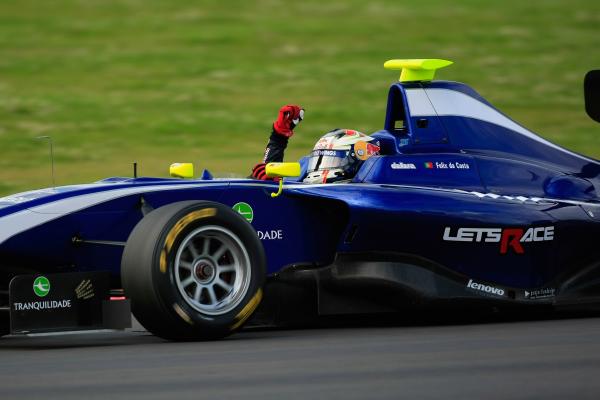 It was all about Ferrari Driver Academy ace Brandon Maisano at Misano, claiming two poles and two wins from the two main races. The podium was in fact inhabited by the same three drivers all weekend, with Maisano’s teammate Eddie Cheever and Riccardo Agostini finishing behind him in the first two races. The order was reversed for the sprint race, with Agostini winning ahead of Cheever and Maisano. Cheever retains the points lead on 158, with Maisano on 142 at the halfway stage. The Red Bull Ring in Austria is next up on 4/5 August.

Luca Ghiotto won the first race of the weekend at Misano ahead of title rivals Bruno Bonifacio and Nicolas Costa. Ghiotto failed to get away from pole in race two and was taken out, while Costa went on to win ahead of Emanuele Zonzini and Santiago Urrutia with Bonifacio in fourth. There was a repeat for Ghiotto in race three, again stalling and being hit. Urrutia won the race on the road, but was penalised for pushing polesitter Samin Gomez at the start. Costa inherited his second win of the weekend ahead of Bonifacio and Kevin Jorg. Costa and Bonifacio are tied on 140 points, with Ghiotto on 122.

Jimmy Eriksson won the first race at Oschersleben from pole, ahead of Mitchell Gilbert and Tom Blomqvist. Kimiya Sato won the second race, which was stopped early due to rain, ahead of Yannick Mettler and Eriksson. Eriksson dominated race three, with Lucas Auer second and Artem Markelov. Sato retired after being pushed off track by Gilbert, a result that means that Eriksson holds a 17 point lead over his Japanese teammate after three of nine rounds.

Formula Renault NEC joined German F3 at Oschersleben, and the event was dominated by the English. With points leader Stoffel Vandoorne and a number of other frontrunners absent, Josh Hill capitalised to win the first two races. Compatriots Jordan King and Jake Dennis joined him on the podium in the first race. In the second race, Dennis fell back to fourth after starting on pole, with King finishing second and Alessio Picariello in third, making his first appearance this season in a series he finished sixth overall in last year. Picariello started the third race from pole, but Dennis came through to win ahead of Hill and Steijn Schothorst. Dennis, King and Hill head the standings on 164, 144 and 136 points respectively, with Assen next up on 4-5 August. 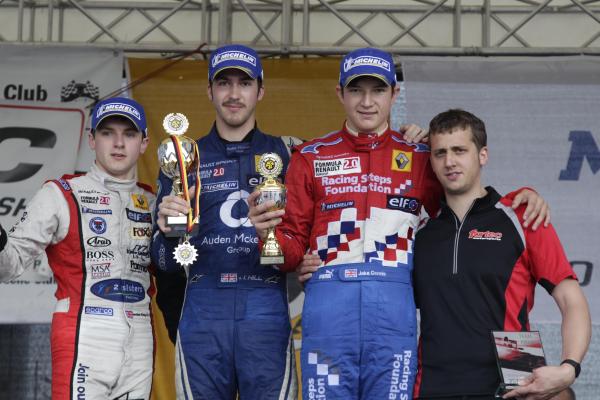 The NEC is boiling down to a battle between the three Brits (Photo: Chris Schotanus)

Brit Dan Wells scored a double victory at Ordos, beating Italian karting graduate Antonio Giovinazzi in the first encounter. That gave him pole for the second race, which took place on a drying track. Wells led early on but the conditions favoured the Team Ukyo duo of Yin Hao Tai and Ren Nagabuchi who started on slicks from towards the back. They passed Wells to finish in first and second places. Wells was second on the grid behind Giovinazzi for race three, but got past his rival for the win on the last lap. Wells now leads the points, four ahead of Giovinazzi. Shota Kiyohara, who won all three races at last month’s season opener, was absent. The series will be back at Ordos for round three on 18-19 August.

PaddockScout Driver of the Weekend: I’m calling it a draw this time, with double wins for Brandon Maisano, Nicolas Costa, Jimmy Eriksson, Josh Hill and Dan Wells. Well done to all.

Next weekend: The World Series by Renault visits Moscow, while the FIA Formula Two Championship is at its home of Brands Hatch.

Marussia to test Chilton and Haryanto at Silverstone this week