Ahead of the British Grand Prix, PaddockScout takes a look at the organisation giving the next Hamiltons and Buttons the funding they need…

All across the junior single-seater categories there are young British drivers aiming to follow in the tyre-tracks of their heroes Lewis Hamilton and Jenson Button and become world champion. Of these, many of the most talented are those that are supported by the Racing Steps Foundation.

Since its formation in 2007, the Foundation’s blue, red and white checkerd livery has become synonymous with promising racing talent from the United Kingdom and is now seen competing at circuits across Europe on most weekends of the season.

While some drivers can use personal backing to fund their racing without being one of the best talents around, you need to be the cream of the crop to be picked up by the Racing Steps Foundation.

After all, it’s private money that’s being used and it’s a not-for-profit organisation. The programme was founded by businessman and motor racing fan Graham Sharp to prevent British racing talent falling by the wayside due to a lack of finance. Raising sponsorship had become increasingly difficult for British drivers compared to those from other nations, even before the financial crash. It was a key reason why a number of British youngsters were going to America to race, or competing in other forms of racing like DTM – despite winning single-seater titles.

John Surtees, the only man to win world championships on two and four wheels, is an ambassador for the scheme, while co-ordinator Derek Walters manages the day-to-day running.

The first driver to benefit was Oliver Turvey, who had just won the prestigous McLaren Autosport BRDC Award after finishing runner-up in Formula BMW UK despite missing six of the 20 races due to a lack of budget. RSF backing allowed him to do a season of Formula Renault in Italy and the Eurocup before stepping up to British F3, where he finished in second place between Red Bull Juniors Jaime Alguersuari and Brendon Hartley.

Turvey went on to finish fourth in Formula Renault 3.5 in 2009, before finishing sixth in his rookie GP2 season. With Racing Steps unable to fund a second season GP2, Turvey had to settle for a McLaren development driver role, which has seen him regularly entrusted with testing duties over the regular race drivers. 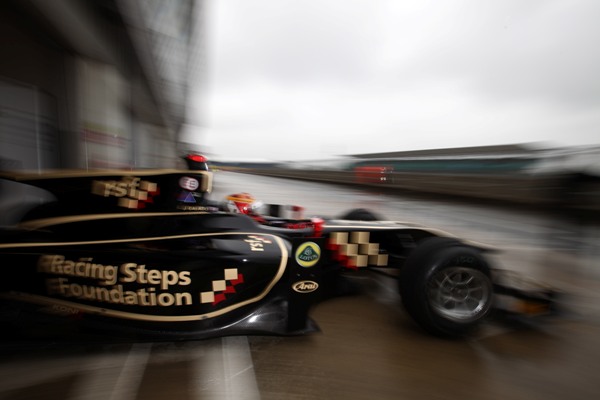 James Calado is impressing in GP2 - something that wouldn't be possible without RSF funding (Photo: GP2 Media Service)

James Calado was the next recruit, signed up to contest Formula Renault UK in 2008 after winning a shootout. In his second year in the category he finished as the runner-up, a feat he repeated when he stepped up to British F3 the following year. He then moved on to GP3, where he was again the runner-up. This year he’s impressing in his rookie campaign in GP2, running third in the points.

Jack Harvey began his single-seater career with RSF backing at the start of 2009 in Formula BMW Europe, narrowly missing out on the title to Robin Frijns in 2010. Last year he switched to British F3, a championship in which he is now leading the points.

When Dean Smith beat Calado to the Formula Renault title and McLaren Autosport BRDC Award in 2009, RSF stepped in to allow Smith to contest the GP3 Series in 2010, finishing seventh overall.

At the end of 2010, Oliver Rowland and Dan Wells came out on top of an assessment of over 20 drivers, and both were entered into the Formula Renault UK Winter Series. Rowland won a drive for the following season, finishing runner-up and then winning the Finals Series and the McLaren Autosport BRDC Award. This year he’s racing in the Formula Renault Eurocup.

Having been backed by RSF since 2008, Jake Dennis stepped up out of karting and in to the new Intersteps series, itself backed by RSF, in 2011. Dennis won the title, and is this year in contention for the Formula Renault NEC title.

Rowland (above) and Dennis are two of the most exciting prospects in Formula Renault (Photo: Renault Sport/DPPI)

RSF has been increasing its role in karting, and currently backs the three drivers in the Zip Young Guns squad, which was set up by the late “Mr Karting” Martin Hines and races this year in the KF2 category. Those drivers are Ben Barnicoat, a McLaren Young Driver, Ricky Collard, son of British Touring Car racer Rob Collard, as well as Sam Webster.

With Surtees’ influence, the programme has expanded on to two-wheels as well as four, backing drivers in the Moto 3 category of bike racing.

While racing in the junior categories has become increasingly difficult for those without wealthy families or connections, thanks to the Racing Steps Foundation, talented British drivers are being given the chance to impress the people at the top.